A little over 18 months ago, this baffling object popped up on Memebase, well known for contributing nothing of value to the Internet ever. 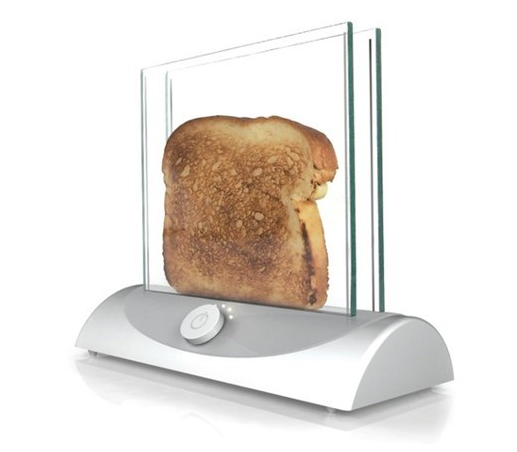 The caption that they gave for this is “How is this not on shelves?! Toast-making would be epic.”

Let’s ignore the crushing sadness that fills my heart at the idea that someone might think that toast-making — the act of slowly heating a piece of bread until it’s hotter and drier and browner than it previously was — could ever be described as “epic” and focus on that first sentence.  How is this not on shelves?  Well, because it doesn’t exist.  Memebase doesn’t seem to have picked up on this, but hope is not lost.

The Memebase post links back to Incredible Things, a website full of mostly awesome things with captions written by someone named Brittany High, who writes like (or maybe is) a 13-year-old girl doing voiceover in a self-deprecating teen movie about her own life.  Here’s a sample of Brittany’s take:

I call it the InvisiToaster, but that’s just me and I have a knack for naming things. The concept was created by Inventables Concept Studio who are looking to manufacture the toaster. The thing works by heating glass technology, whatever that is. SCIENCE! Obviously the see-through design is meant to prevent your toast from getting any more toasty than you’d like. But seriously? I’ve got better things to do than to sit and watch my toast toast. No… no I don’t. BUT I like to throw caution to the wind and just let the toaster surprise me!

Yep.  She seems unbearable.  But you’re starting to see a vague notion that this is not in fact a real thing with the phrase “whatever that is.”  Her post links back to Enpundit, which I’ve never heard of, but at least they finally get around to saying, “this toaster design is still a concept.”

Yes, this toaster is a “concept,” which means it came from a “designer.”  Normally, those two words would be totally innocuous, but I’ve spent too much time on the Internet to be fooled by that.  You see, in Internet world, “designer” means “guy with AutoCAD and/or Photoshop software and literally no concept of the laws of physics or connection to reality whatsoever” and “concept” means “whatever ridiculous and definitely impossible thing was most recently vomited forth by the febrile and drug-addled brain of some ‘designer.'”  Here’s a hint: if 1) your “concept” uses technology that does not already exist, 2) you can’t explain how it does what it does, or 3) you haven’t built a prototype, you haven’t “designed” a goddamn thing.  You’ve “thought of” it.  You’re basically a stoner on the couch saying “dude, what if tacos were also Doritos?”  I guarantee that millions of people had that idea after making the groundbreaking observation that taco shells are basically the same as tortilla chips, but it took some actual food engineers with money and machinery and some knowledge of chemistry before it became a real thing.

This toaster checks all of my boxes.  There is no prototype, or that image up top would be a photo and not a rendering.  That means that no one’s actually shown that it works.  And they haven’t explained how it works, beyond the phrase “heating glass technology,” which is not a thing.  You can’t just throw the word “technology” after what you wish your product could do and claim to have designed something that uses it.  Otherwise I’d have made millions off of my inventions for levitating car technology and graphene condom technology and infinite money technology.  And it doesn’t use technology that already exists, otherwise they’d say “it’ll work kind of like a [thing that already exists], only it’s a toaster.”  The closest thing I can think of is the technology in Range Rover windshields, which look like this: 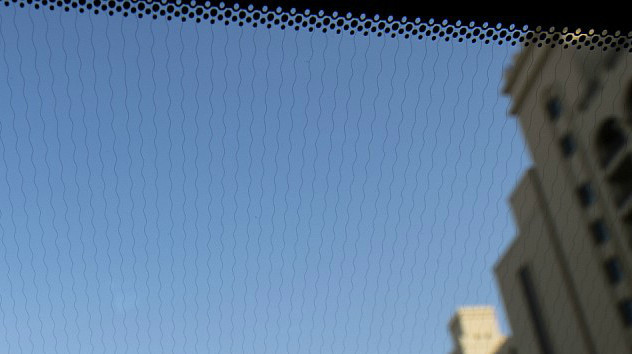 Those tiny wires are the same as the black wires that defrost your rear windshield, only much thinner and closer together so they sort of blur out.  You can’t really even see them unless you look closely.  But they will keep your windshield from fogging, and that’s because of the wires in the glass.

The problem is that in order to get the wires in your toaster hot enough to toast toast, they have to be somewhere in the region of 1000 to 1500 degrees.  You can heat glass that much, but it’ll turn gooey and horribly dangerous and likely burn your house down.  You can’t heat the wires in the glass that much without also heating the glass, so that doesn’t help you either.

The fact is that this, sadly, is another doomed invention.  I’d love to ask the “designers” over at Inventables Concept Studio how they plan to build this, but sadly they are unavailable for comment.

There is one final gem in this story though.  See the (now broken) url for this toaster?  Read it closely.  That’s right: before the entire website went dark, they had this toaster filed under “success stories.”