So, GM. General Motors. In the last 4 years, GM has lost around $80,000,000,000. That’s 80 billion dollars (a number that will be the topic of a future post). If you were to run wads of hundred-dollar bills through a paper shredder at the rate of 15 per second, it would take you 170 years to run through that amount. The reason they have lost so much money is that for many many years, they have made cars that were a little bit cheaper than the competition and also very much shittier. Recently, as you know, GM has been trying to repair their image by making their cars slightly less shittily. They have also come up with a few concept cars that they think will fix the company. Here they are. 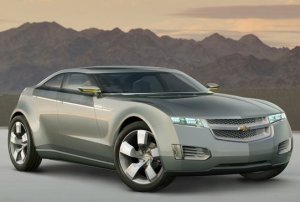 Why They Think It’ll Work:
It’s an all-electric car that actually makes sense. It’s not butt ugly, it goes fast enough to hit the highway, it’s got enough range to be useful in everyday life, and it’s environmentally friendly. It’s not too expensive, it’s practical, seems like a brilliant solution and GM has been touting it for years as the future of the car.

Why It Won’t Work:
First, they can’t make up their damn minds. The first picture is what they said it would look like when they

introduced it. The second one is what it will look like when it comes out. It has gone from the nearly windowless Road Warrior of the environmental revolution to the (much better) slightly edgy sedan of sometime in the future. Which is the second problem. It’s not coming out until 2011. This is a concept that’s already 2 years old and they’re already putting the same innovative drivetrain into cars for Opel and Cadillac. Meanwhile GM is bleeding cash like a hemophiliac stuck in razor wire. BRING IT OUT ALREADY. They need monetary salvation right fucking now, and they’re dicking around asking for money and redrawing the bodywork. It’s almost sad.

Why They Think It’ll Work:
I guess someone at GMC’s design department went in to the big cheese’s office and said, “I know! We’ll make a car/truck thing! People love those!” Hopefully, someone countered with “No they don’t, you dumb fuck,” but either way, they decided to increase its appeal by making it a hybrid. Now if you look closely at the photo, you’ll notice that it’s not all that ugly, so people might be able to get over the fact that car/truck things are bad at being both and buy it anyway. Parts of it are actually quite cool.

Why It Won’t Work:
They stole those parts. The headlights and grill are from Audi, and the wheels are from…also Audi. As are those little fog lights, the hood vents on the side, and the shape of the rear windows. It’s an Audi that Audi will never make. Check out the A5, R8, and TT if you don’t believe me. The other reason that it won’t work is that it’s a useless piece of shit that will be too slow for a car and too small for a truck, or they’ll fix that and it’ll be too heavy for a hybrid.

Why They Think It’ll Work:
I don’t know. I really don’t.

Why It Won’t Work:
Saturn has been shut down. Also, look at it. Sometimes there’s just not enough vomit in the world. 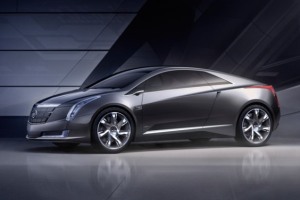 Why They Think It’ll Work:
It’s the Chevy Volt with a sexy body. Plus it’s a Cadillac, which has been increasingly associated with modern style and always associated with luxury. And also it’s really really ridiculously good-looking.

Why It Won’t Work:
Unfortunately, this one actually could work. I say unfortunately not out of a vendetta against GM, but because GM will either be broke and the concept will be scrapped, or they’ll go completely under and the plans will die with them. The ideal situation for me would be if GM died, someone else bought Cadillac, and they rolled this out themselves, as is. Then it would be sexy and still reliable. GM can’t be spending their time making quasi-useful exciting cars, they need a good staple. They have sadly made a very appealing promise that they won’t be able to keep. Also it seems to have no mirrors.