Two years ago, I wrote about how Cosmopolitan magazine had taken a break from giving awful advice on dating, sex, fashion, food, and so on to give awful advice on how to be a woman at Super Bowl time. Feel free to peruse that link, it’s all still relevant except that the teams have changed.

This year, I’ve decided to write about two myths surrounding the Super Bowl and the people who watch it that somehow, despite never having actually been true, continue to resurface around this time of year.

What’s also not funny is making shit up, especially when you’re impugning a massive subset of the population in the process. Basically, what happened is this:

In January of 1993, a news conference was called in Pasadena, the site of the upcoming Super Bowl. At the conference, a coalition of women’s groups informed reporters that significant anecdotal evidence suggested that Super Bowl Sunday is “the biggest day of the year for violence against women.” The fact that the evidence was entirely anecdotal apparently didn’t raise any red flags, because journalism tends to take a backseat when it comes to emotional issues like this.

Later that month, Lenore Walker, a Denver psychologist and author of The Battered Woman, appeared on “Good Morning America” and said she had compiled a ten-year record that showed a sharp increase in violent incidents against women on Super Bowl Sundays. A representative from FAIR, Laura Flanders, was present to lend credibility to the cause. FAIR, in case you were curious, stands for Fairness and Accuracy In Reporting, which is about to be a hilariously ironic fact.

The next day, Linda Gorov from the Boston Globe reported that women’s shelters and hotlines are “flooded with more calls from victims [on Super Bowl Sunday] than on any other day of the year.” Gorov’s only source was “one study of women’s shelters out West,” which apparently “showed a 40 percent climb in calls, a pattern advocates said is repeated nationwide, including in Massachusetts.”

Around the same time, a company called Dobisky Associates sent out an enormous mailing to women around the country, saying, “Don’t remain at home with him during the game.” And it wasn’t just women involved; Robert Lipsyte of the New York Times would soon be referring to the “Abuse Bowl.”

Now, I know that this was 1993 and the Internet was not a thing, but you’d think that someone along the line would have, I don’t know, made a fucking phone call to one of these women’s shelters “out West.” I mean for Christ’s sake, “out West” is the kind of language that’s usually used to describe pipe dreams in movies and where kids’ dogs go when they die.

So some women made up a story, and some other women ran with it. Shit happens. Journalists lie for a good story sometimes. Fine. That’s not the worst part. The worst part is that everyone believed them. Commentators were quick to offer justification for this statistic that no one had previously heard of. Men are testosterone-driven creatures, the reasoning goes. They’re brutes. Not only that, but football is obviously male aggression incarnate. Collisions, macho posturing, shit-talking, roaring crowds—it’s basically gladiatorial combat for the TV era, broadcast to a hundred million mindless, slavering fans. It brings out the worst in men. They can’t control themselves, and when they get angry, they lash out violently.

Problem is, that’s not how domestic violence works. According to the CDC’s National Intimate Partner and Sexual Violence Survey, there were roughly 11 million incidences of domestic violence in 2010. Would you like to know what 53% of the victims had in common?

According to a study published in Psychiatry News in 2007, 24% of heterosexual relationships involve violence. Of those, half are reciprocal—both the man and the woman are violent toward the other. Of the half that are non-reciprocal, though, 70% of aggressors are women. To sum that up, in a relationship where only one partner is violent toward the other, women are more than twice as likely to be the aggressor as they are the victim.

Back to the Super Bowl. Ken Ringle from the Washington Post was one of the few people to fact-check the claims being made. When he reached out to Janet Katz, professor of sociology and criminal justice at Old Dominion and one of the authors of the study cited by the news conference, she said “that’s not what we found at all.” Charles Patrick Ewing, quoted by the Dobinsky mailing as saying that Super Bowl Sunday was the worst day for domestic violence of the year, said, “I don’t think anybody has any systematic data on any of this. I never said that. I don’t know that to be true.”

When Ringle tried to contact Linda Mitchell of FAIR (remember what that stands for? You can laugh at the irony now), she referred him to Lenore Walker, the psychologist who had gone on Good Morning America. Walker referred him to Michael Lindsey, another Denver psychologist and an authority on battered women. Lindsey told Ringle that “I haven’t been any more successful than you in tracking down any of this.”

So there you have it. It never happened. It was never true. At no point has it been true that domestic violence spikes on Super Bowl Sunday, or Sundays in general, or in cities whose teams lost. It is a myth, invented out of whole cloth by a group of people who were seriously misguided at best, and perpetuated out of negative stereotypes about the aggression of men. Let it go.

Take a look at some of these headlines: 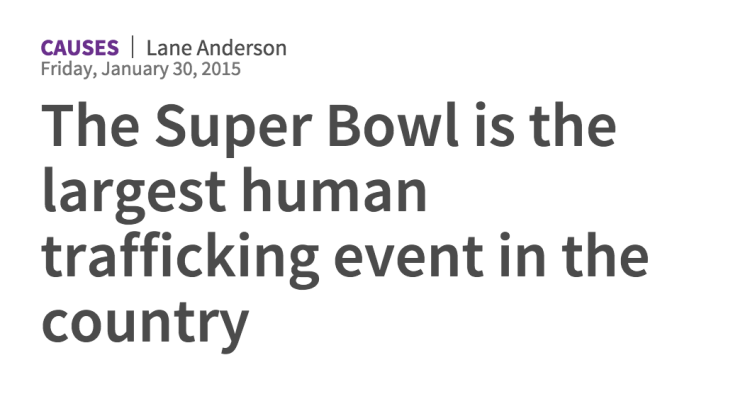 Pretty clear, right? Here’s some quotes to go with:

Any time you have a large number of people gathering in one place, especially males, and it’s a party atmosphere, it’s prime ground for sex trafficking

The Super Bowl is the greatest show on Earth, but it also has an ugly underbelly…It’s commonly known as the single largest human trafficking incident in the United States.

Same theme. Men can’t control themselves. Men get drunk, they hire prostitutes, and many of those prostitutes are underage, held against their will, drugged, abused, or all of the above. And because of the massive influx of drunk men to cities hosting the Super Bowl, demand dictates that sex traffickers transport women in droves to service them. Two years ago, Rep. Christopher Smith cited numbers from the National Center for Missing and Exploited Children that claim 10,000 women and girls were trafficked to Miami for the 2010 Super Bowl. Some rumors put the number as high as 100,000.

Before I get to empirical studies on the matter, let’s really think about that logically. First of all, the average attendance of the Super Bowl is around 70,000, and has been for decades, because that’s how many people fit in a football stadium. According to ESPN, around 150,000 people traveled to Indianapolis for the most recent Patriots-Giants Super Bowl. That was a hugely hyped game, but let’s assume that’s a standard number. According to AdWeek, roughly 46% of football fans are women. Let’s assume that applies to traveling fans as well. That means that any given Super Bowl host city is seeing an influx of around 81,000 out-of-town men for Super Bowl weekend.

Now the average population of the metro area of a host city over the last ten years has been roughly 5.6 million. 61% of those—3.4 million—are between the ages of 20 and 60. Half of those are men. So if we assume that prostitutes are hired almost entirely by men between the ages of 20 and 60, each host city is seeing an increase in potential customers during the Super Bowl of 0.4%.

That’s it. Less than half a percent. For every qualifying man that travels to a Super Bowl city, there are 250 already living there. So how could prostitution numbers possibly spike as much as is being claimed?

The answer, as you might have guessed, is that they don’t. According to Kate Mogulescu, founder and supervising attorney of the Trafficking Victims Advocacy Project at the Legal Aid Society,

There is no substantiation of these claims. The rhetoric turns out to be just that. No data actually support the notion that increased sex trafficking accompanies the Super Bowl.

In 2011, The Global Alliance Against Traffic in Women, a network of nongovernmental organizations, published a report examining the record on sex trafficking related to World Cup soccer games, the Olympics and the Super Bowl. Their findings?

Despite massive media attention, law enforcement measures and efforts by prostitution abolitionist groups, there is no empirical evidence that trafficking for prostitution increases around large sporting events.

And yet the myth persists. Earlier I showed you a quote that said, “the Super Bowl is…commonly known as the single largest human trafficking incident in the United States.” That wasn’t from Nancy Grace or some other sensationalist source that feeds off of creating fake panics over things like lipstick parties and vodka tampons. That was from the Attorney General of Texas, preceding the Super Bowl that was about to be hosted in Dallas. Every year, the myth is written about again. Airports hold awareness training. Task forces are formed. The FBI announces new initiatives.

In reality, Tampa police made 11 prostitution arrests in the week leading up to the Super Bowl—not out of the ordinary at all. Miami police made 8. And Phoenix police reported no uptick in arrests either.

As with domestic violence, I am fully supportive of the idea that one is too many. One child forced into sexual slavery is too many. And I’m also aware that the Super Bowl is the most watched event in the country, making it a good megaphone for all manner of causes. That’s why No More, an anti-domestic-violence organization, ran an ad last year.

But inflating problems that do exist—and inventing ones that don’t—isn’t helping anyone, especially when the lies are kept alive by appealing to stereotypes about the baser instincts of men.