Who loves design concepts?  You do.  So if I showed you a concept, you’d get all super-happy, almost delirious, like this kitty, right? 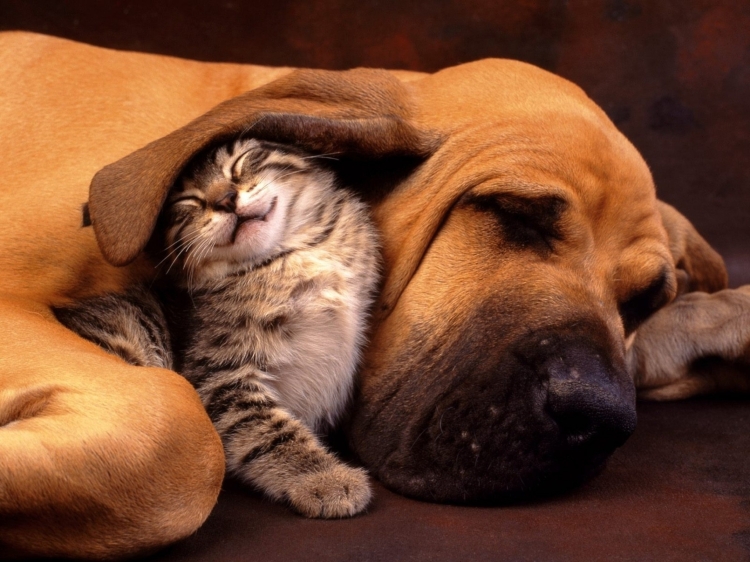 You bet your velvety ear blanket you would.  You ready for this?  Brace yourself and squeal in anticipation as I reveal THIS.

Now I know what you’re thinking.  You’re thinking “that’s an odd device, I wonder what it’s—is that a fish, and a bunch of bananas, and also a pineapple and if so what are they doing encased in a slab of green goo and WHAT THE HELL IS THAT GET IT AWAY FROM MY CHILDREN”.  That’s my best guess.

Does it help if I tell you that enormous Flubber brick is actually called the Electrolux Bio Robot?  No?  Fine.  It’s a fridge.

Yeah.  The best part is that not only is it a fridge, it’s a fridge designed by someone who has no knowledge of fridges or physics or food or anything at all except how to render his delusional brainchild with graphic design.  Let’s walk through his explanation.

The refrigerator – a colony of biomechanical robots.  How it works: the transformation of invisible infrared radiation into visible light.  In other words, it cools by absorbing heat energy and radiate it in a different range of wavelengths.  On the same principle works cooling the space shuttle “Shuttle”.  Cooling process does not require energy.

Really.  It doesn’t require energy at all?  That’s amazing, and a violation of—let me check—every single law of thermodynamics.  Need a quick refresher on the laws of thermodynamics?  Great!

The incredibly oversimplified version is best thought of in terms of gambling, and goes like this: 1) You can’t win, 2) You can’t break even, and 3) You have to play.  What that means in real, less-oversimplified terms is that you can’t get more energy out of a system than you put into it, you can’t get the same amount of energy out of a system as you put in, and energy is always moving from things with more energy to things with less energy.

What that means is that if you have a cold object in a warm room, heat will always move from the warm room to the cold object, and you can’t get that heat out of the object without using more energy than went into it in the first place.  That is what fridges do, and that is why they need to be plugged in.

But you know, it must be good if the space shuttle “Shuttle” uses it.  Come to think of it, that’s an incredibly uncreative name for a shuttle, so it’s a good thing *checks again* we don’t use it. I seem to recall writing a thing about how photons work like a week ago, so I’ll just refresh.  A photon of infrared light hits an electron.  That electron absorbs some energy and is excited into a higher state, then drops back down.  When it drops back down, it emits that energy as another photon.

Now, it doesn’t take a genius to see that the photon that comes out cannot possibly have more energy than the one that went in, and in fact it has less, since every exchange of energy is less than 100% efficient (darn laws again).  It may interest you to know that since visible light has more energy than infrared, the idea of absorbing IR to emit visible light is fundamentally impossible to the same degree that jumping off a tall building and not becoming a smear of marinara sauce on the pavement is impossible.

So the guiding principle, the bedrock of your idea, is absolutely impossible.  Hmm.   That’s…that’s a bummer, man, but let’s ignore that for just a second and move on to the more pragmatic aspects of your design.

Products are loaded into a gel.  The strong surface tension of the gel creates a separate pod for each product.  You can fill the fridge for 90% and at the same time, all products are readily available, the meat does not need to freeze it well kept and well.

Oh dear.  You somehow think that there’s a gel that’s strong enough not to skoosh out on to the floor, but soft enough to push food into?  And why the hell would you put your food in it anyway?  And why would it form neat ovals around everything, even the things that are not oval-shaped?

Also, why would meat not need to be kept frozen, just because it’s mushed into a blob of alien Jello?  And how would you organize anything?  DID YOU THINK THIS THROUGH AT ALL?

Now the refrigerator is several times less space than its outdated predecessors.  It can be placed vertically and horizontally, and even on the ceiling if you’re in zero gravity.  There is no need to provide a place to open the door, no need to wash and most importantly, it uses less electricity.

Finally, you’ve gotten something right.  It doesn’t have a door.  But that zero gravity shit?  That’s just ridiculous.  You can put a normal fridge on the ceiling in zero gravity as long as you keep the door closed, or you don’t care about cheese sticks bouncing around your spaceship.

Bio-robots can identify and select a product for each of the optimal cooling rate and temperature of storage.  The process of cooling is accompanied by the emission of the gel – a process known as luminescence.  Operation is to become beautiful and spectacular.

Your tenuous grasp of the English language has turned the first sentence of this paragraph from delusional ramblings to incomprehensible word vomit.  It doesn’t work, you’re a very silly design student, and you should move on.  Oh, and you still haven’t defined what a bio-robot is.

Should I continue?  Should I point out that the “non-sticky, odorless gel” you’ve invented in your mind has no real-world equivalent?  Should I mention that the idea of the gel bulging pregnantly outward as you fill it is unfeasible?  Should I even cast light upon the fact that you seem to have a number pad on your fridge (what the fuck do you need a number pad on a fridge for)?  Or it is all…
just…
hopeless?

You know what, I’m not going to do any of those things.  I’m going to sit here and mourn the fact that I seem to be the only person in the world who notices the moronic nature of “inventions” like these.  Oh you don’t think I am?  This came from a design competition sponsored by Electrolux, they of the tiny washing machine.  This design made the top 25 best submissions, which means that either they only had 25 submissions total or that no one at Electrolux has noticed that this violates the most rock-solid laws of physics that we know of.  And I have.  It saddens me.

But I’m done whining, and you’re done caring.  You just want to see a picture of someone squishing an orange into a wall of brightly-colored lime slop, don’t you?