“Baby” by Justin Bieber is the most watched video on Youtube.  It’s been seen close to 700 million times for a collective watching time that would make you sad, so you can do the math yourself because I’m not telling you.  It has garnered over seven million comments, and even if you think Justin Bieber’s overrated or that his fans are insane to a degree that makes them a danger to themselves and society, most people agree that it’s an innocent, shallow song about young love.  Or possibly babies, but I think the first thing.  Anyway, I wrote that thing that I just linked to a while back, and I was just browsing old posts and came across it, so I watched the video again (FOR RESEARCH, shut up) and it turns out that JB is one slimy little fucker.

So first, Justin Bieber is standing outside going “Waaaaaaoooooaaaaoooooaaaaaoooooaaaoh” a lot, and apparently it’s cold because he wraps his jacket around himself and looks like he’s about to cry.  I don’t know, maybe it’s really cold there…in Los Angeles.

Then he decides to go bowling with his other pre-pubescent buddies, because he’s like twelve or something and that’s all you can do at that age, and encounters a group of similarly-aged girls who are also bowling.  He begins to sing at them, using the line “I know you love me, I know you care,” and they make this face:

which is absolutely the correct reaction when anyone at all starts a conversation that way.  Then JB bowls a strike, and everyone is way too excited about it, then she’s all whatever, and she rolls one too.  JB decides that that’s quite enough foreplay and goes over to engage her in conversation, which he initiates by sitting RIGHT IN THE GODDAMN WAY.

That’s all well and good, and I admire his confidence, but then he does this:

which is the universal symbol for “inappropriate advances.”  Her friend makes this face in return, 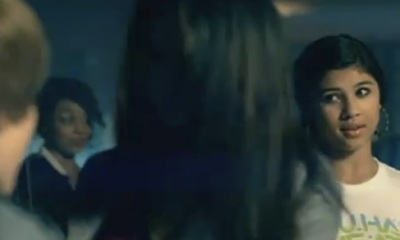 Which again is exactly the right reaction to what this little fucker is doing, because grabbing women and pulling them toward you is not ok.

Then the chorus happens, and Justin does this,

Which I think is supposed to be flexing but it’s very difficult to tell because he’s a tiny little man-child.  Then he gets in the way a lot more and gets all up in her face again, and this time she physically pushes him away while he makes a rapist face, like this.

Again, I would have thought that no (quasi)adult human being living in a first-world country would actually need to be told that if a woman pushes you away, it’s body language for “how about a nice tall glass of will you please kindly fuck off before I taze you,” but Justin doesn’t seem to get that.  Here’s his reaction:

NO.  BAD JUSTIN.  Seriously, dogs learn faster than this kid, and not even smart dogs.  Stupid dogs.  If a little dog tries to hump your leg and you kick it in the penis, it’ll stop humping you.  Maybe Justin needs to get kicked in the penis…

Anyway, moving on.  So after he tries to grope her, which would be illegal if they were grown-ups but they’re not so it’s just fucked up instead, she shoves him away again and goes to sit down somewhere else.  Naturally, like any well-adjusted man with restraining orders in his future, he goes to sit next to her, but wait there’s more.  She, despite all her shoving and scornful faces (which Justin interprets as Jailbait for “I want you”) runs away again.  At this point, the entire rest of the bowling alley is starting to see what’s happening, as demonstrated by Kid With Flat Top who is hanging out with Drake and they shake their heads and point.  Did I mention that Drake is here?  Yeah, Drake’s here.  He just hangs out on the sidelines and doesn’t say anything and is disappointed.  Here’s that happening.

And then decides to continue a trend that I’m sure is surprising to no one at this point by looming over her like a goddamn vampire watching her sleep and then…*sigh*…grabs her clothes again.  Drake, for some reason, approves this time.

You know, when I set off on this mission to tell you why Justin Bieber is a creepy fuck, I didn’t think it would be so goddamn repetitive.  I thought it would be a bit of a stretch, because surely a teen heartthrob like His Bieberness wouldn’t actually make such a horribly inappropriate video, and surely of the two-thirds of a billion people who have seen this, I can’t be the first one to notice it.  Surely, I tiredly reassured myself, I’m just reading a little too far into this, like I always do, in order to entertain the masses.  But then I paused, this far into my write-up, and saw this.

We are now about 37% of the way through the video, and he’s made not one but six inappropriate sexual advances.  I suppose…I suppose we should power through and see what’s next…ok, he’s rolling on a pool table, and now they’re engaged in some sort of Justin’s-group-versus-What’s-Her-Face’s-group dance-off.  Apparently this is how mating rituals are conducted in southern California.  Lots of people dance and they’re all reasonably talented and stuff, and then…

THANK THE SWEET BABY JESUS OR WHOEVER IT IS THAT YOU THANK WHEN SOMETHING TERRIBLE IS HAPPENING AND LUDACRIS SHOWS UP, IT’S FUCKING LUDACRIS.

Ludacris is here now, and everything is better because good rapping is happening, and it’s delivered beautifully and the whole time I’m wishing he’d just go all “move, bitch, get out the way” and it’d be his song now.  But it doesn’t matter, because Luda’s here, and all is right with the world again.

And then Justin and his crew are back and, apparently engaged in a bet with themselves to see how disruptively you can behave in a place of recreation, which is a bet that they’re all winning, they’re dancing in the goddamn bowling lanes and they’re not even wearing approved footwear.  Then some very odd “dance moves” happen.

By this point, the lady person in question seems to have come around, though her friend still has a “remember when he tried to grab your boobies?” face on.

End result?  They totally get together. 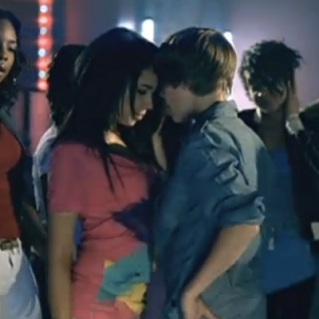 This is of course a wonderful way to end the video, because it shows men that if a woman dislikes you to the point that she has physically tried to distance herself from you more than half a dozen times, all you have to do is keep pushing your face into hers and she’ll eventually like you.

2 thoughts on “NO MEANS NO, EVEN IF YOU’RE JUSTIN BIEBER”