The headline here is “Russian Space Agency Announces Plans to Build Nuclear-Powered Deep Space Rocket,” which is exactly the kind of headline that I look at and think, “This will either be really interesting or absolutely full of shit.”  After line one, it’s not looking good.

The Russian space agency announced that they are planning to build a nuclear powered rocket for missions to Mars.

Oh boy.  Of course they are.  They lost the race to the moon, and now they want Mars.  I know the Cold War is over, but that’s how I’ve chosen to interpret this.  But Russia has a really shitty record with pushing the envelope of science.  Here’s an article on Cracked.com about all the appalling shit they did to get their space program going, and when their nuclear weapons program started, they made some shockingly stupid decisions like not numbering any of their warheads.  So when the USSR broke up and the warheads were scattered among a dozen suddenly unstable countries, and Mother Russia tried to send troops out to collect them, they had literally no idea how many there were, where they were, or whether they had them back.

The chief of the Russian space agency, Anatoly Perminov, said the preliminary designs for the rocket will be finished in 2012 and in total the project will take nine years and almost $600 million to complete.

That’s just absolute crap.  There is no fucking way.  Now I don’t know if Inhabitat is reporting this wrong (likely) or if the Russian Space Agency in question is massively underestimating their numbers (also likely), but each individual Shuttle launch costs 450 million dollars, and that’s basically just tuning and filling up a ship that you already have.  That doesn’t include development or the ship or the boosters or the tank or anything.  For perspective, the original Apollo Program (adjusted for inflation) cost $170 BILLION.  And NASA is saying that a mission to retrieve material from Mars would cost $100 billion.  Now I’m not saying that the Russians can’t do this for 165 times less than NASA (even though NASA is literally the only organization with interplanetary experience), but…actually I am saying that.  There’s no way in hell. 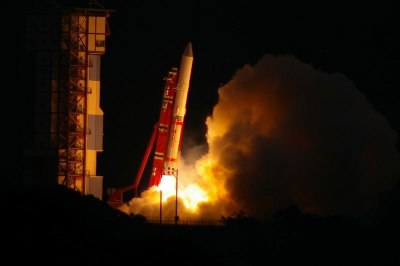 “The implementation of this project will allow us to reach a new technological level surpassing foreign developments,” Mr Perminov said in his announcement. Perminov noted that the rocket would be used for manned missions to Mars and the Roscosmos website mentioned that further goals would be to create “planetary outposts.”

Oh, perfect.  We’ve already established that what you want to do is absolutely implausible, so let’s step it up a notch.  I don’t want to sound like a party pooper, but you cannot build planetary outposts.  No one on Earth has the ability to do that.  We don’t even know how to put a human being in zero-gravity for more than six months without turning them into useless bags of jelly.  Please at least tell me you know how to make the rocket itself, right?

Damn it all, Russia.  What they’re referring to here (though not in Inhabitat because did I mention they don’t know what the fuck they’re talking about?) is an ion engine.  You see, you can’t move in a vacuum unless you push something away from you, which is how rockets work.  You can throw ions away from you instead of combusted material, and it’s more efficient, but no one’s even close to doing this on a megawatt scale.  Go ahead, look up how a fission reactor works and imagine cramming that into an area roughly the size of a tanker truck.  The cooling systems alone are vital not just for safety but for the actual functioning of the plant, and they’re all water-based and fucking enormous.  And regardless of what devil magic they have to work to do that, it’s not an electric “engine.”  An engine is by definition mechanical, and this won’t be.
I’m not saying it can’t be done, but it can’t be done now.  It can’t be done quickly, and it absolutely can’t be done for the cost of a Shuttle mission.
And there’s one more thing.  You may have noticed I put three pictures of rockets in this post.  You may also have noticed (if you did, you’re more observant than the Inhabitat editor) that they’re not the same rocket.  Those are the three pictures on the Inhabitat website picked to go with this story, and they all carry the hover text “russian nuclear rocket.”
The first one is a Delta II 7925-10, and it is not Russian and it is not nuclear.  It is American, it is a normal rocket, and NASA’s been using them to put lots of important space probes and the like into orbit for 22 years.
The second one is a M-V, also known as a Mu-5, and it’s Japanese and has a pretty short and shitty track record.  It can get to an altitude of 150 miles, which is almost half of a thousandth of a percent of the distance to our little red neighbor.  So that’s impressive.
And the third one is a Titan II, as evidenced by the massive letters on the launch tower that read, “TITAN II”.  It’s only nuclear in the sense that it’s used mainly as an ICBM, so it’s what our nuclear arsenal is mostly made of.  And it’s only Russian in the sense that we wouldn’t have them at all if Russia hadn’t been so damn sketchy with their rockets and nukes in the 60s.  Also a lot of them are pointed at Russia.
The only reason I can think of that all three of these rockets appear in the same post is that someone at Inhabitat said to the author, “Go and get me some pictures of some rockets,” and they Googled “rocket” and copied and pasted.

I honestly don’t know who to be more facepalmy at here, Inhabitat or…well, Russia I guess.  But the bottom line is this.  Russia is not going to Mars in the next nine years.  We’ll get there eventually, but don’t hold your breath.

3 thoughts on “THIS ISN’T ROCKET SURGERY”