Buckle yourselves in, kids.

Announcing HardGrip, the first extreme rock climbing game for Wii. HOORAY EXTREMENESS!!! If you’ve ever wanted to experience the thrill of scaling sheer rock faces, but don’t want to risk things like “heights” or “sun” or “nature” or “a Cheeto-less area with no carpeting,” Human Soft has the game for you. Some game controllers require only the use of your thumbs and the occasional racial slur yelled at the TV, but since HardGrip is designed for the Wii, this game will let you experience the thrill and adrenaline of sheer-rock-face climbing by forcing you to move your arms literally some inches! Just like real rock climbers!

Also the adrenaline of being thrown violently into a concrete block!

You’ll love the experience of free soloing some of the most amazing rock walls in the world, ranging from “brown” to “a different shade of brown,” and even including our new bonus wall, “gray”! But that’s not all. Obviously, we at Human Soft are committed to giving you the most thrilling experience it is possible to have while standing still in your own living room, so we’ve added vertigo-inspiring graphics like “plants”, “birds”, and “the sky”, and dizzyingly realistic climbing action that covers the full spectrum of climbing motions from “moving one of your arms” to “moving the other one of your arms.” If that doesn’t dizzy you, well then you must be some kind of adrenaline junkie, or else someone who occasionally walks down stairs!

HardGrip even supports the Wii MotionPlus©®™℗℠ for even greater precision and authenticity. Compete against other climbers and hone your skills to earn respect and become the top extreme climber! 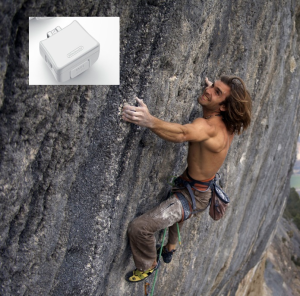 Because these two things are totally the same!

HardGrip takes players on a tour of exotic and stunning locales around the globe as they compete in open events or invitation-only official races. These locales are as diverse as they are realistic, and include “a tropical place” and “a different tropical place.” Not only that, but you’ll be competing against other people whose skills at standing still and waving their arms in the air rival your own, or even exceed them. With no harness or lifelines because you’re a tiny virtual man with no face who doesn’t need them and who can regain boundless energy simply by shaking out, players must solve seemingly impossible challenges like deciding which of over 5 buttons to push at any given time and conquer their fear of pushing “Try Again” to make it to the top of the fake cliff. 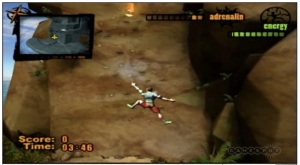 Players will also have to conquer their fear of unrealistically stretchy people.

Speed counts despite our sample video in which the tiny man takes about 3 minutes to move approximately his own body length, but climbers who prove their ingenuity and daring will earn more respect from similarly-minded mouth-breathers that think your repeated button-pushing and arm-waving is somehow ingenious and/or daring. As climbers progress, their skills at standing still will have to become truly awesome by retarded standards to make the grade.

“Free climbing is all about style and creativity. Just making it to the top fast isn’t the point if you used an easy route.” says Gabor Kadas, CEO of Human Soft and man who has never talked to or seen an actual climber. “By incorporating the MotionPlus, we can capture that competitive spirit in a game for the first time except we totally can’t, actually.”

This is an actual future product. The stuff in fixed width font is from the official press release, the rest of it is me. Feel free to read it again with that knowledge, but rest assured, it won’t help.

2 thoughts on “This Will End Only In Tears”