Know what this is?

If you thought, “Why, that’s Cal Poly’s new Black Widow car,” you’re right. And also a huge nerd. If you thought “it’s a giant black carbon fiber penis on wheels. With a window.” then you get extra points.

It is in fact, Cal Poly’s new Black Widow car, optimistically branded a “supercar” by the website I found this on. Now when I think “supercar,” I think of 7-liter mid-mounted V12s, heat-rainbowed titanium quad-exhaust systems (see left), 17-inch carbon-ceramic brake rotors, back tires as wide as bison, and an exhaust note that sounds like HELL ITSELF IS SCREAMING IN PAIN AT THE SHEER AWESOMENESS THAT JUST WENT BY. 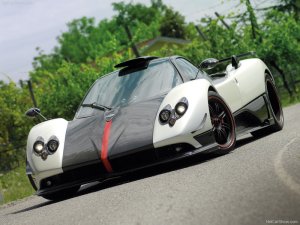 Sorry. I like cars. I do not, when I think “supercar,” think of fuel efficiency, but that’s what the Black Widow is for. It apparently makes 2,752.3 MPG, which is stupid.

But Angus, you protest, why is it stupid? After all, any technology that allows for that kind of efficiency must translate somehow to the road-going cars of the future, right? No. You know why this car is so efficient? Three reasons. First, it weighs 96 pounds. That means that its weight will almost triple if a normal person gets in it, and that it has no safety measures whatsoever, so that’s not helpful for the road. Second, it has a drag coefficient of 0.12. The physics of drag coefficients are somewhat complicated, but suffice it to say that it’s only aerodynamic because it looks like a penis, which is neither practical nor appropriate for family cars. Third, it has the most pathetic engine in any car ever seen, a 50cc Honda with 3 horsepower. To put that in perspective, that’s the engine capacity of about two film canisters, with about four times the horsepower of a garbage disposal. A Honda Civic has a 1.5 liter engine, this one has a 0.05 liter engine. As such, it tops out at 30 miles per hour and you could probably hold it back from moving at all by putting your hand in front of it (do not put your hand in your garbage disposal to test this).

The website Inhabitat, where this story came from, says “design will change the world.” Maybe, but not this one.