I know, it’s been a week. Chill. I’m lazy. This is pretty amazing, though. I have already mentioned it a while back, but the plot has thickened. Apparently, some absolute dipshit politician in Oregon has proposed a $54 registration charge for bikes on the road, with an additional $54 renewal every two years. He’s calling it a “bike registration bill” because if he called it the “anti-fun tax” then he would get impeached or something. I’m not sure what the possible penalties are for a state representative. Maybe just shot in the face. The problem here is not only the fact that after two years, a shit ton of people will have paid more in registration than they did for their bike, but his reasoning. 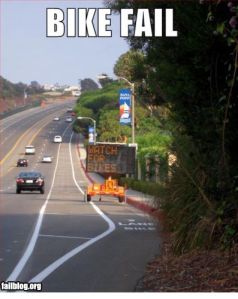 He maintains that since bikers have equal rights on the road, they should pay to maintain them the same way that motorists do. Yeah right. Pictured at left are equal rights for bikers. He also says that bikes cause equal wear and tear on the roads. I don’t even know how to make that sound stupider than it in fact is. Throw in the fact that cops hate bikers, cops in Oregon are douches, and that bikers almost never win cases where they are hit by cars, and you have a bill that “will probably fail”. That’s a quote from Representative Wayne Krieger, the bill’s main sponsor. THEN WHY THE FUCK ARE YOU INTRODUCING IT? Essentially what he’s doing is trying to get as many people as possible to hate him without actually changing anything. Go team. The bill itself has some choice quotes that make it seem substantially more retarded, such as “Bicycle does not mean tricycles”. Also, you don’t have to register your bike trailer if it has inflatable wheels. As opposed to wooden or solid aluminum, I guess. Anyway, I see this as yet another reason why using the roads in Oregon sucks a lot. Allow me to elaborate. In Oregon, the maximum speed limit on the highway is 65. On the effing interstate. That’s the lowest anywhere. In Portland (4 lanes), it’s 55. Not only are they retardedly low, but they have somehow been drilled into the minds of the youth as THE ABSOLUTE FASTEST SPEED YOU SHOULD EVER GO EVER OR YOU WILL FUCKING DIE TO DEATH. I have had the argument with my Oregon friends time and time again that this is not the case, and if the road is two lanes wide and straight as an arrow for the next 5 miles then you can probably go 80 (or 200), but to no avail. I don’t know how the driver’s ed Nazis did it, but they did. 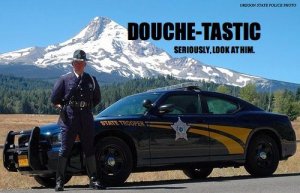 In Oregon, on the other hand, there is a separate class for speeding in a funeral procession ($109) and any violations that don’t fit a specific class are treated as Class B ($242 minimum). Here’s a few more. A U-turn is $145. Going 100 at any time ever (your wife is in labor and on fire at the same time) will cost you $1,103. Really. It says explicitly that there are to be no exceptions. I have a 25-page PDF of all of these, but I think that’s enough.

And the most excellent part is that despite the fact that Oregon cops bring in $200,000 apiece in tickets every year, they get paid $70,000. That’s a $130,000 profit on each single officer, which goes straight to not fixing roads, not letting you pump your own gas, and paying off the shortcomings from no sales tax. Which prompts Oregonians to complain about tax, having to pump themselves, and speeding. God I hate it.