If you read the title and are already upset, then you’re already part of the problem.  If you don’t want to read the opinions of those who think differently than you, you might as well close the browser and move on.

Speaking of which, women.  I have long said that women are too nice to each other (or at least pretend to be), and that’s what leads them to be sensitive and emotional.  I’ll clarify.  When men are but boys, a mere five or six years old, they’re already abusing each other.  Fights, forts, snowballs, sticks, insults, and so on.  As they grow older, they incorporate more sophisticated bullying and swear words and so on.  I’m not saying that’s an inherently good thing, but it does mean that an adult man has been playfully insulted and criticized so often that it doesn’t affect him as much.  A self-confident adult male is self-confident not because he’s never been told he’s not good enough, but in spite of the fact that he’s been told that over and over.  That’s why when we’re helping our friends move and find a box labeled “decor and such” and call it the gayest box ever, he can just laugh it off.

Women don’t do that.  I don’t know what it’s like to grow up a woman, because I didn’t, but I have spent a lot of time around them as adolescents and adults, and they don’t mess with each other the way men do.  If a friend of mine is wearing a shirt that makes him look like a member of the Persian mob, I’ll tell him.  If a girl is wearing something that looks terrible, her friends won’t.  They won’t tell her that her hair looks bad or that her relationship problems are her own fault.  Women reassure each other constantly that they’re pretty and nice and that any guy would be lucky to have them, which is a nice sentiment, but it’s not always true.

Take dating.  Let’s say a guy and a girl are dating.  Apparently that happens sometimes.  Let’s say it’s not going that well, which could be for any number of reasons.  Some of them are the guy’s fault, some are the girl’s fault.  It’s equally likely.  But women will not admit that.  They will never admit that they might be part of the problem, because they’ve been constantly reassured by their friends that they’re perfect and that guys are assholes and that it’s all men’s fault or society’s fault or Playboy’s fault for putting women who are too attractive on the cover.

Now put everything I’ve told you together.  That means that the Quotes section is full of women telling themselves and each other how beautiful and wonderful and perfect they are, with no reality check and no dissenters, and then other women repin those things accompanied by a comment that says “omg so true.”  It has enhanced the ability of women to gather in groups and reassure each other that their problems are not their fault by a factor of thousands.  Worse, they’re collectively proud of the irrational shit they do.  So women are pissed at men because a million other women have told them they should be, and men are pissed at women because their moronic behavior toward men is now being super-endorsed by everyone they know, and because they can now handle absolutely zero criticism without accusing men of oppression or emotional abuse.  It’s a bad situation.  I’ll show you some examples.

Let’s think this through.  First of all, there is not a single woman in the world who thinks she’s one of the rotten apples on the ground.  Second, there is not a single boy in the world who thinks he’s picking one of the rotten ones.  All of the sad, lonely women who read this will come away from it thinking “it’s not my fault, I’m amazing.  Boys just aren’t trying hard enough.”

I’m going to tell you a hard truth.  Sometimes it’s you.  Maybe you’re stupid or shrill or annoying or clingy or ANY number of reasons that boys don’t like you.  Maybe the “easy” ones aren’t sluts, as you seem to be implying, maybe they’re genuinely nice girls who aren’t holding out for some impossible hypothetical standard.  Here’s the thing.  Awesome girls — the ones who are fun and nice and so on — do not have trouble getting guys to like them because they are awesome.  If one guy doesn’t like you, maybe he’s an ass or maybe you’re just not his type.  If no one likes you, it’s probably because you’re horrible.  Next. 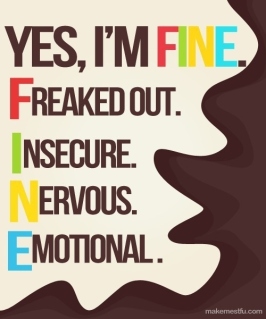 Oh good.  So when you say, effectively, that nothing’s wrong, what you mean is that many things are wrong.  And you’re ok with that.  You’re totally fine (and I use that word the way normal humans do) with abjectly lying about how you feel, even though it’ll make you feel worse to do so because no one will know that something’s wrong with you.  No one’s a mind reader.  No one will know that you’re freaked out, insecure, nervous, or emotional unless a) you TELL them or b) they sort of pick up on your mood, in which case they’ll ask you what’s wrong.  If, when they do that, you tell them you’re fine, they will drop it.  Making someone fight like hell for the privilege of being your shoulder to cry on is not something to be proud of.  Speaking of which…

Are you fucking kidding me?  What you’re saying is that if you walk away from a guy and he chases you, that’s a good thing?  What happened to no means no?  When you’re mad at a guy and you want nothing more to do with him and say something along the lines of “this conversation is over” and leave, you’d rather he pursue you?  Because I’m pretty sure that’s illegal.  Also, if I’M talking to a girl and she gets mad and leaves, I’m going to let her leave because she’s clearly upset and wants to be somewhere that I am not.  If you want to be near him, don’t fucking leave.

You know, as I write this, I’m picking up on an epistemological difference between men and women.  You see, when men say words, they’re under the impression that those words have meanings that most people understand.  Not so the fairer sex.  If a girl says “I’m done,” a nice, respectful guy will think “you know what, I’ll respect her decision and let her go.”  You know who hears “I’m done” and thinks, “Like hell you are, this isn’t over, I will MAKE you love me?”  PSYCHOPATHS.  So if you tell a guy this and he doesn’t fight for you, don’t take that to mean that he doesn’t care.  Take that to mean that he’s both capable of understanding English and unlikely to put you in a hole and lower lotion to you in a basket. 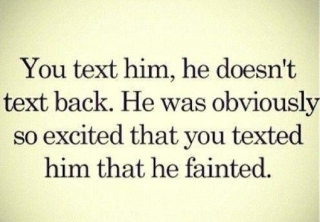 Hey look, it’s funny’s cousin: not funny.  This one’s obviously meant to be taken sarcastically, implying instead that he didn’t text you back because he’s an incorrigible asshole, or maybe that he’s balls deep in your best friend.  Not texting back, according to this and other posts I found, is an egregious offense.  But maybe — and understand that I’m only saying this because I’m a man — he’s busy.  Maybe he’s in class, or at dinner, or in the shower.  Maybe he’s hanging out with his friends playing video games and he’ll text you in like ten minutes at halftime.  Maybe his pajama pants don’t have pockets.  Maybe he fell asleep mid conversation, as has happened to me twice by the same girl (you know who you are) this month alone.  Maybe it’s not a big deal.  Let it go. 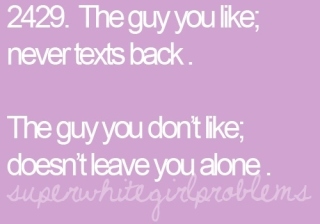 Firstly, learn how to use semicolons.  Here’s a useful guide from The Oatmeal.  Second, this is one of the most oblivious things I’ve ever seen.  Seriously, holy shit.  Let’s flip it.  So you like a guy, you text him, he doesn’t text back.  That means he doesn’t like you, which means you’re the girl he doesn’t like who won’t leave him alone.  The guy you don’t like who won’t stop texting you?  That’s you.  You do that.  Except to him, you’re the girl he likes who never texts back.  So in your own mind, you’re the perfectly normal girl who’s juggling an aloof dickhead and a clingy creeper, and from an objective point of view, you’re both. 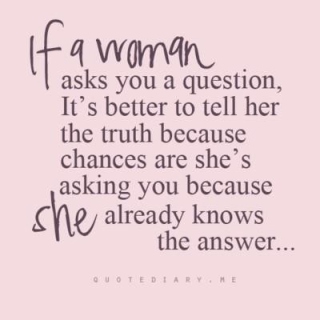 Well that’s fucking stupid too.  If you know the answer to a question, there are only two reasons to ask it.  One is for the sake of rhetoric.  We call these rhetorical questions (see how that works?).  The other is in order to entrap someone in something you think they might lie about.  If those are the only kinds of questions you ask the men in your life, you are categorically a bitch.  The worst variation of this is when you know you’re not going to like the answer (“Do you think she’s pretty?”) and ask it anyway.  Why would you do that if you’re going to get mad at the answer?  Of course I think she’s pretty.  Why?  Because she’s pretty.  You’re not the only attractive woman in the entire world, and if you need to be told that you are, this isn’t going to work. 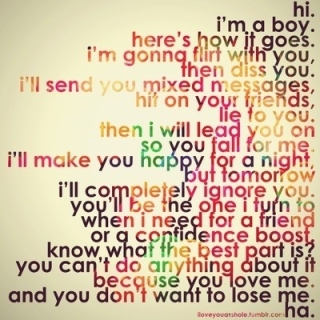 No, you think we mean “skinny girls with big boobs” because you aren’t one.  There are tons of women who are thought of as hot by the mainstream male population specifically because of their “woman-sized hips.”  Kim Kardashian, Jennifer Lopez, Eva Mendez, Jessica Biel, Scarlett Johansson, Rihanna, Beyonce, and so forth.  If you think you’re “curvy” and yet most guys don’t think you’re hot, it’s probably because you’re fat.  That’s unfortunate, but don’t blame men because your self-image is deluded.

And now we go the other direction.  No one expects you to look like a Victoria’s Secret Angel except you.  Women are more critical of each other than men ever are.  And really, all this is saying is that you’re, at best, as shallow and image-oriented as we are. 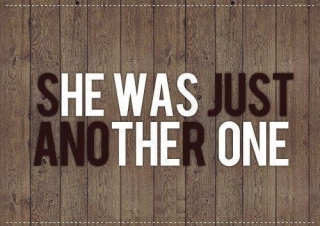 Clever color scheme aside, no.  If you’re just another one to him, then he’s not the one.  Simple as that. 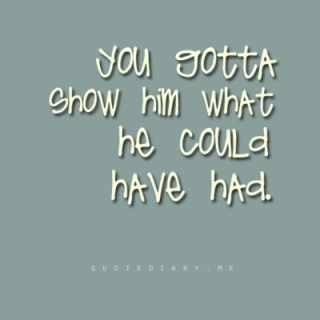 If you were with a guy and you were a certain way, and then he dumped you, then this is dumb advice.  If “what he could have had” is different than what he had, then he’s justified in leaving you.  If, on the other hand, he rejects you, then go for it.  He probably knows what he could have had and didn’t like it; that’s why he rejected you.  Still dumb. 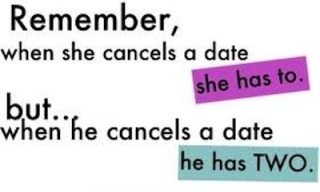 Remember, girls: men are scumbags.  When a woman cancels a date, it’s because she has other, more important things in her life.  Women have a life outside of their relationships, so it’s totally acceptable for them to cancel a date if necessary.

Men, on the other hand, should worship you.  You should be literally the most important thing in your boyfriend’s life, so that he has no priorities other than being with you on your date nights.  If he cancels, the ONLY POSSIBLE EXPLANATION is that he’s cheating on you.

You’ve got to be kidding me.

I’m putting this in for two reasons: first, because of the word “increbile.”  Which isn’t even close.  And second, because no he isn’t.  He might be sorry he lost you, and he might also be glad he got rid of the clinger who won’t stop talking about how increbile she is.

These are all stupid.

Instead of all this bullshit, maybe you should just admit that you’re making problems for yourself at least SOME of the time.

Then we can talk.