So in our last post that was titled like this, we visited some douche who thinks that he can get energy out of cars by making them worse.  That was a bad idea.  This idea is quite a lot worse.  Here’s the headline:

Again, a preposterously bold claim. The idea is that this train would travel in a vacuum tube, unimpeded by air resistance, and would thus be able to go 4,000 miles an hour.  Here are the problems (I’ll try to keep this one short):

First, four thousand miles per hour is mind-bogglingly fast.  There is nothing that we have ever made that goes that fast and is NOT in space, and that includes cruise missiles and bullets.  Nothing goes that fast.  Now, they’ve decided that it’ll be a maglev train, so that eliminates a lot of the issues with wheels turning and track friction, but what about turning?  Let’s give this thing some very generous engineering specs and say that the tightest turn it’ll ever have to make at full speed is a one-mile turn radius, which is WAY bigger than any existing highway turns.  Let’s say you weigh 155 pounds, because I do.  So some quick calculations will show that the earth is pulling down on you with a force of 691 N (newtons).

Then we plug in all the information for centripetal force to figure out how hard you’ll be pulled sideways by a 1-mile turn at 4,000 mph and we get this:

You may see a problem there, and it’s because there’s a problem there.  The force you feel sideways in the middle of that turn is over two hundred times stronger than the force holding you down, or roughly eight times the average force felt by a baseball when it gets hit by a bat.

For further perspective, think of the sharpest corner you’ve ever taken in a car.  That was probably less than one lateral G.  This is 202.  That will absolutely kill you.

Ok, so it can’t turn.  Let’s just say it goes in a straight line from LA to New York, and that we’re somehow able to put it underground or aboveground or otherwise get everything out of the way (I’m ignoring funding problems here; only physics ones).  That leads us to problem number two.

In order to make this no-air-resistance plan work, the inside of the tube has to be a near-perfect vacuum.  We’re talking about a few million molecules of air per cubic centimeter, which is about a trillionth of Earth’s atmospheric pressure.  We can do that here on Earth, but it’s not easy.  The biggest one we’ve ever made is at NASA (of course) and is called the Space Power Facility, and they use it to simulate outer space.  Anyway, if the whole tube is evacuated to that level of vacuum, each square foot of the tube on the outside will be feeling about 2,000 pounds of pressure.  So if the tube is 20 feet across, each ten-foot section is going to be crushed inward with a total of about 2.5 million pounds of force.  You’re going to have to engineer something that can support that kind of pressure, and that’s hard too.  Here’s what the SPF looks like: 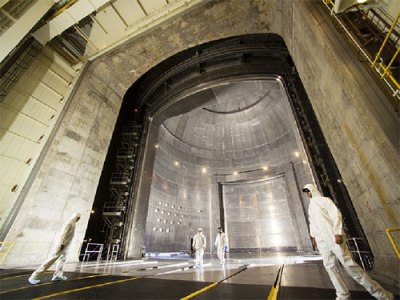 Furthermore, you have to get all the air out in the first place.  A 20-foot tube, 4,000 miles long, has a volume of 6.6 billion cubic feet, or roughly the entire world’s annual oil production.  You’re going to have to find pumps that can not only move that kind of volume (there aren’t any), but they’ll have to deal with leakage and the fact that somehow, you’ll have to open and close the thing to get people on it.  Right now, the technology doesn’t exist.  But that’s all sort of irrelevant in the light of my final point:

This article says it’ll be able to go from New York to LA in 45 minutes, which is obviously a number they got by dividing the roughly 3,000-mile distance by 4,000 miles an hour.  That’s a stupid way to do it, because it ignores the fact that you have to get to 4,000 mph.  That takes time.  How much time?  I’m glad you asked.

Let’s say you can comfortably sit in your seat undergoing roughly the same acceleration of the average car pulling onto the freeway, which is about 0-60 mph in 10 seconds.  That’s 2.7 m/s^2.  At 2.7 m/s^2, it’ll take you eleven minutes to get up to 4,000 miles an hour.  And you have to brake at the other end too, so that’s another eleven minutes to slow down.  You’re only going 4,000 mph in the middle, so your actual journey time is more like an hour.  Still ok, just keep it in perspective.

And how much energy does it take to get a train to that speed?  If the train is 20 passenger cars at 53 tons each (according to the California DOT), then it’ll take 76.87 GJ (gigajoules) of energy to get it to that speed.  That’s also the amount that has to come off it at the other end, but maybe you can use some kind of regenerative braking and save some of it.  Anyway, that’s the amount of energy the average passenger car uses in a YEAR.  Doesn’t sound very efficient.

Besides, how the hell do you generate that kind of energy?  The average coal-powered plant kicks out about 500 MW, and 76.87 GJ is the same as 21 MWh.  But that 21 MWh needs to come through in only 11 minutes, or 0.18 hours, so you need to take 116 MW from that coal plant to run this train.  Feasible.  But that’s enough power to run about thirty thousand houses.  Again, efficiency comes into question.

But now we come to the final issue and the reason that this will never exist, cost be damned:

Let’s say you’re going full speed and need to slam on the brakes for some reason.  Let’s say you can brake about as hard as a passenger car with fully locked brakes without killing everyone from the deceleration.  Your stopping distance at that speed will be a hundred and ten miles.  So basically, if there’s a crack in the track or something, you’re going to hit it.  There’s nothing you can do.  And if it’s bad enough, then the train will crash in a SPECTACULARLY HORRIBLE fashion.  Like, debris over dozens of miles, pieces flying fast enough to set the air on fire.  Worse than a plane crash by an enormous margin.  If the support system collapses, the tube will collapse like a soda can.  If it ruptures, the air will come screaming down that tube in a screaming shockwave that, when it collides with a 4000-mph train, will melt it like a meteoroid entering the atmosphere and again, fiery death.

The margins of error on something moving that fast, especially on the ground, are so razor-thin that any kind of loose bolt or failure of any kind will result in hundreds, if not thousands, of deaths.  And that’s just not going to happen.