I want to start with a word.  It’s a simple word; it’s only four letters long and not at all difficult to pronounce.  It’s anatomical in origin, it’s almost 800 years old, and yet it still is considered by some people  to be “one of the few remaining words in the English language with a genuine power to shock.”

According to the Online Etymological Dictionary, the word has been avoided in public speech since the 14th century, and considered obscene since the 17th.  Any news anchor in the country would be fired immediately if they were to use it to describe someone, and yet recently that particular word has been leveled at an unassuming 16-year-old from Cranston, Rhode Island.  Here’s a taste:

The person they’re talking to there is Jessica Ahlquist, who has been in the news a fair bit recently.

Basically, there was a banner at Cranston West High School in Cranston, Rhode Island, that looked like this. 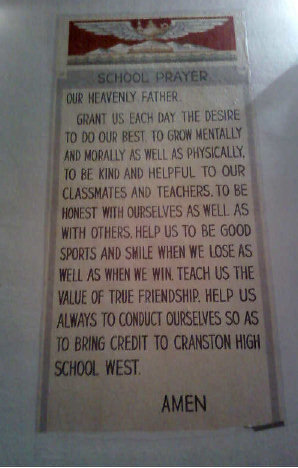 The issue there is that Cranston West is a public high school and thus, pursuant to separation of church and state (SOCAS) laws, is not allowed to use public funding to support one religion over another or the presence of religion over the lack thereof, and thus phrases like “our heavenly father” and “amen” are problematic.

“If people want to express themselves religiously, I would advise them to go to church,” said Nero. “I see a lot of empty pews next to me.”

But the banner stayed up by a school board vote of 4-3.  That was in December of 2010.  In April of 2011, the Rhode Island ACLU filed suit against the city of Cranston with Jessica as the lead plaintiff.  In the suit, she said:

The prayer’s presence in the school promotes and endorses the ideals of Christianity and the concept of a single “Heavenly Father”. I firmly believe that it should not be on display in a public school and is in direct violation of my and other students’ civil rights. As an atheist, I do not feel included in the message of the prayer; in fact, I feel excluded. And the public hearings that I have attended have added to that feeling — that my views and beliefs don’t count, or have less value than those of the Christian majority. I don’t feel that I or anyone else should have to feel that way at school. The prayer does not belong in a public school and that’s why I have come forward to challenge it.

She is, of course, absolutely right.  The law is the law, whether a majority of people decide that it should be broken or not.  Now, finally, the banner is down.  More specifically, it’s covered up.

And then the insults started rolling in.

Over the past few days, Twitter and Facebook have lit up with horrific insults, responses to those insults, responses to the responses, etc.  The worst of them, not by its content but by its source, came from Rhode Island State Representative Peter Palumbo, who called Jessica Ahlquist “an evil little thing” and followed it with, “Poor thing. And it’s not her fault. She’s being trained to be like that…she’s being coerced by evil people.”  That’s an elected official at the state level saying, essentially, that atheists are evil.

But it gets worse.  I either took or compiled 56 screenshots of abuse directed toward her, and they seem to fall into a few categories. 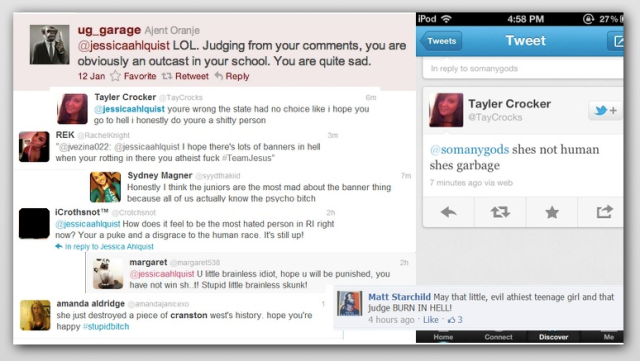 I know what your first question is, and the answer’s no.  I do not know why none of these people is capable of taking a photo standing upright.  The point is that this is your typical angry outcry, ad hominem attack.  Not really any substance to it, and it’s the kind of insult that just rolls right off.  Not too far from what’s been leveled at me.  Anyway. 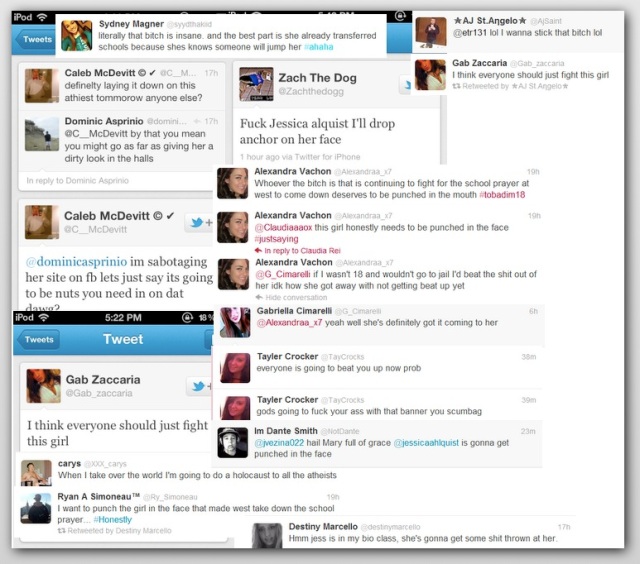 These are slightly more concerning, and I’m under the impression that disciplinary action is being taken.  These people aren’t exactly criminal masterminds—I’m counting eleven people’s real, full names—so I hope that was adequately addressed.  Threats of throwing shit, punching, beating up, stabbing, drowning, holocaust, cannibalism, crucifixion, and yes, ass-rape—those are serious.  That’s not ok.

These people aren’t really a threat, they’re just the entire reason this case came up in the first place.  Let’s see what we’ve got here.

Infinitysidewaysheartmusicalnotesquaresquarecheckmark has a point.  I mean after all, what’s the harm?  Why can’t atheists just ignore the fact that they’re being ostracized?  I mean, it’s not like the people at the school are openly hostile…toward…atheists…umm…

Cammie Giarusso (here’s her Facebook page) is falling into that usual trap of thinking that public opinion should decide whether the law is upheld.  Should we journey back to another historic court decision?  One that was almost universally disagreed with by the student body and state officials?  Let’s do that.

On May 17, 1954, the Supreme Court ruled that schools could no longer be segregated by race.  In Little Rock, Arkansas, nine black students decided that they wanted to go to school with the white students.  Not only did several segregationist groups blockade the front of the school, not only did the governor support them, but he called for the Arkansas National Guard to blockade the front of the school.  One of the students recounted that day:

They moved closer and closer… Somebody started yelling… I tried to see a friendly face somewhere in the crowd—someone who maybe could help. I looked into the face of an old woman and it seemed a kind face, but when I looked at her again, she spat on me.

In the end, President Eisenhower not only federalized the entire 10,000-strong Arkansas National Guard, taking them out of the command of the governor, but he called in over a thousand paratroopers to break up the crowds and escort the students to class.  Sometimes the majority is wrong.

Well, this is pretty simple.  Being an atheist is not illegal, nor is being ugly (which she’s not).  Go through that last status and replace “atheists” with “Jews” and tell me how you think that would go over.

Again.  It’s illegal.  I know you poor Christians only have 80% of the country’s population, more than 95% of its government officials, every major holiday you want, billions in tax subsidies, and a mention of your God in the Pledge of Allegiance and on the money…it must be hard to be so oppressed.  I THOUGHT THIS WAS AMERICA.

Steve Jazz.  Steve has a question.

But that’s not all.  When Steve’s not being imbecilic, he also teaches history!

Sorry, that was still imbecilic.  My mistake.  But wait, Steve’s still got his most salient point left to go.

I THINK that what he’s trying to say here is that since the years of the calendar are based on the year of birth of Jesus, Jessica is secretly religious.  Or something.  So that’s Steve.

I don’t have any screenshots of this, because as far as I can tell, they don’t exist.  I went through the first ten pages of Google results and found atheists defending her, objective news reports, and bigots attacking her, but nothing from Christians saying, “You know what?  I love Jesus, and I love praying to him, but I respect that my religion is a private matter that should stay out of the public square, and that the Constitution mandates as such.”  Not once have I seen that said, about any case like this.  Just like you never see moderate Muslims saying that suicide bombers are extremists who’ve gotten it wrong.

HERE’S WHY I’M NOT SURPRISED

A lot of the people who have reacted in Jessica’s defense to this have taken the tack of trying to tell the Christians, “What’s all this vitriol?  Shouldn’t followers of Jesus be nice to everyone?  Didn’t Jesus say ‘love they neighbor’ and all that awesome stuff?”

You see, by Christian standards, Jessica Ahlquist is doomed.  She’s blasphemed against the Holy Spirit, and there is no greater sin.  Not child abuse, not rape, not genocide (actually, the Bible seems to be ok with all that).  Nope, let’s turn to Mark 3:28-29:

Truly I tell you, people can be forgiven all their sins and every slander they utter, but whoever blasphemes against the Holy Spirit will never be forgiven; they are guilty of an eternal sin.

See what that means?  That means that all those horrible things that everyone’s saying are not only justified, but totally forgivable.  God’ll be fine with them.  But when Jessica speaks against it, she can’t be forgiven.

And that’s not a unique verse.  Shall we see if the Bible addresses blasphemy elsewhere?

And the LORD spake unto Moses, saying … he that blasphemeth the name of the LORD, he shall surely be put to death, and all the congregation shall certainly stone him. – Leviticus 24:13-16

Well that’s not encouraging.  What about the New Testament?

And to you who are troubled rest with us, when the Lord Jesus shall be revealed from heaven with his mighty angels, In flaming fire taking vengeance on them that know not God, and that obey not the gospel of our Lord Jesus Christ: Who shall be punished with everlasting destruction from the presence of the Lord, and from the glory of his power. – 2 Thessalonians 1:7-9

And the brother shall deliver up the brother to death, and the father the child: and the children shall rise up against their parents, and cause them to be put to death.  And ye shall be hated of all men for my name’s sake: but he that endureth to the end shall be saved. – Matthew 10:21-22

The Son of man shall send forth his angels, and they shall gather out of his kingdom all things that offend, and them which do iniquity; and shall cast them into a furnace of fire: there shall be wailing and gnashing of teeth.

If a man abide not in me, he is cast forth as a branch, and is withered; and men gather them, and cast them into the fire, and they are burned – John 15:6

But he that is spiritual judgeth all things, yet he himself is judged of no man. – First Corinthians 2:15

Be ye not unequally yoked together with unbelievers: for what fellowship hath righteousness with unrighteousness? and what communion hath light with darkness? – Second Corinthians 6:14

So I think that covers that.  All those people who are surprised at the way Christians are reacting need to get their heads out of the sand.  The New Testament and the teachings of Jesus are not books and sayings of love, nor do they preach tolerance.  They espouse hate and bigotry.  There are vile words spoken about homosexuals.  Parents are encouraged to beat their children.  Jews are blamed for the deaths of the prophets.  Jesus denies the right of a son to bury his father, and introduces the idea of thought crime—a man who even thinks about another woman in a sexual way has effectively already slept with her, and a man whose mind fills with anger is as guilty of violence as if he had raised a hand himself.  Women must be subservient to men, and silent in church.  Non-believers must be shunned.

And above all, a message of faith.  When I say “above all,” I don’t use that lightly, as some lazy conclusion.  I mean that the absolute most important thing in the entirety of the New Testament is that one hold the belief that Jesus is divine.  There is no sin that cannot be forgiven if one believes, and no good deed that can earn one any credit without faith.

Do you see the conclusion we’ve come to?  It’s ugly, to be sure, and might cast your naive ideas that Jesus was a great moral teacher into a slightly dubious light.  But it is the only conclusion to be drawn.

The fact is that this hatred toward non-believers isn’t out of character.  It isn’t un-Christian, and it isn’t forbidden by Jesus.