Recently a friend of mine posted this on his Facebook wall.  All I did was blank out the names. 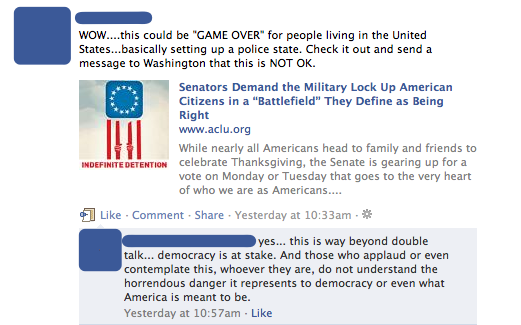 “Wow,” I thought to myself, “those are both perfectly reasonable reactions to what I’m sure is a headline that has not been dramatized or blown out of proportion even a little.”  In my experience, people are always very reasonable and do lots and lots of background research whenever they say anything on the Internet, so I had no trepidation whatsoever in clicking on the link.  Here is what I found.

“Well my goodness gracious me!” I said to myself.  I talk to myself as though I am my grandmother talking to myself, except apparently she swears like a filthy sailor when I’m not around so perhaps this metaphor isn’t especially accurate.  “That headline is not at all inflammatory, and I will absolutely accept it at face value.  There are almost definitely probably a group of senators who are demanding that the military arrest me, an American citizen, right here outside my own window.  I live on the top floor and outside my window is the tree where the squirrels do it, but they’ll think of something.  They’re the government.

I did a quick search on The Google for the bill, Senate 1867, that everyone is in such a tizzy about, just to make sure that everyone agreed with the ACLU, because copying and pasting makes things true.

Let’s take a quick gander through these headlines, all of which are equally not-at-all-inflammatory.

Then I remembered that I’m not a reactionary, government-fearing moron.

I read the actual bill.

The bill in question is S. 1867, the National Defense Authorization Act bill.  I didn’t read the whole thing, you understand—it’s 682 pages long and deals with a vast array of things, from the “Modification of conditions on status of retired aircraft carrier ex-John F. Kennedy” to the “Report on alternatives for the procurement of fire-resistant and fire-retardant fiber and materials for the production of military products.”

The part we’re concerned with is under Subtitle D, “Detainee Matters,” Sections 1031 and 1032: “Affirmation of authority of the Armed Forces of the United States to detain covered persons pursuant to the Authorization for Use of Military Force” and “Requirement for military custody.”

First, in the interest of debate rules, burden of proof, and making this article look stupid because they deserve it, I’ll let the ACLU go first.

While nearly all Americans head to family and friends to celebrate Thanksgiving, the Senate is gearing up for a vote on Monday or Tuesday that goes to the very heart of who we are as Americans. The Senate will be voting on a bill that will direct American military resources not at an enemy shooting at our military in a war zone, but at American citizens and other civilians far from any battlefield — even people in the United States itself.

The power is so broad that even U.S. citizens could be swept up by the military and the military could be used far from any battlefield, even within the United States itself.

There’s a lot of emotional manipulation in there too, but these are factual claims and can thus be repudiated with further facts.

Now let’s look at the appropriate section of the bill.  I’m going through all of it, so hang in there.

IN GENERAL. Congress affirms that the authority of the President to use all necessary and appropriate force pursuant to the Authorization for Use of Military Force (Public Law 107–40) includes the authority for the Armed Forces of the United States to detain covered persons (as defined in subsection (b)) pending disposition under the law of war.

So to summarize, this is an affirmation of powers that already exist under the AUMF, which passed almost unanimously (518-1) over ten years ago, and no one’s whining about that.  It’s that law, not this new one, that says that given all the things that happened on 9/11/01, the President is “authorized to use all necessary and appropriate force…in order to prevent any future acts of international terrorism against the United States” as long as he doesn’t violate the War Powers Resolution of the Constitution, which divides up what the President can and can’t do without Congress’ permission.  Or to summarize even more, the President is still allowed to use the military to arrest terrorists.  Isn’t research fun?  That intro part has also referred us to subsection (b), and OH HEY that’s the next section, so let’s look at it.

COVERED PERSONS.—A covered person under this section is any person as follows: A person who planned, authorized, committed, or aided the terrorist attacks that occurred on September 11, 2001, or harbored those responsible for those attacks.

(2) A person who was a part of or substantially supported al-Qaeda, the Taliban, or associated forces that are engaged in hostilities against the United States or its coalition partners, including any person who has committed a belligerent act or has directly supported such hostilities in aid of such enemy forces.

Again I shall summarize.  This bill affirms the right of the President to use the military to arrest “covered persons,” and covered persons are basically just terrorists or those who help terrorists.  Are you a terrorist?  Have you helped one recently?  Stupendous.  So you should be fine.

Now in case you’re still worried that under this provision, innocent people will be classified as covered persons and treated accordingly—a possibility, I’ll admit—we need to keep going through the bill.  The next section is called “Disposition,” and it just says that the military can opt to a) hold detainees without trial until the war’s over (that’s whats’ happening at Gitmo right now, and a lot of people are inherently upset about that, but again this law isn’t establishing the military’s right to do that), b) conduct a military tribunal, c) transfer the detainee to a civilian court or d) deport them and let their home country deal with them.

The next section is called “Construction” and reads as follows:

Nothing in this section is intended to limit or expand the authority of the President or the scope of the Authorization for Use of Military Force.

That seems important, for some reason…it was something we were talking about…like maybe how people thought this bill gave the government new rights and this part explicitly states that it doesn’t…it’ll come to me.

Then there’s the section that says that the Secretary of Defense has to regularly update Congress on anything they do regarding the application of this rule.  You could easily argue that they won’t do that, but you can’t fault the law on the basis that people won’t follow it.

The next part is called “Requirement for Military Custody.”  This part says that the military has to detain anyone who fits the “covered person” description unless not detaining them is in the interest of national security.  The criteria are still necessary for detention.  Have you become a terrorist in the last few hundred words?  Still no? Tremendous.

Is that clear enough for you?  Surely that settles this.  Let’s recap.

What this law DOES NOT DO, and this is extraordinarily important to realize, is demand that the military arrest American citizens left and right like they’re pulling fucking weeds.  You know who else has the right to arrest American citizens, even if they’re not terrorists?  City police.  Sheriff’s departments.  State patrol.  Federal marshals.  Park rangers.  Campus police.  Hundreds of thousands of people have the right to arrest you, the citizen, for something as insignificant as littering.  And you’re worried that the military is being too hard on terrorists?  It allows them to arrest citizens, yes, but only if they’re terrorists and DID I MENTION THEY ALREADY HAD THE RIGHT TO DO THAT pursuant to a bill that passed over ten years ago.  This law changes nothing.

Because if you don’t—if you just post some bullshit on Facebook like you knew this was coming, like it’s just another indicator of the inevitable decline of America, like not a single piece of legislation has passed in fifty years for the benefit of the citizenry—I’m going to find you.  And I’m going to sit you down in a chair, and I’m going to print out all 682 pages of the bill, and I’m going to strap them together into one nice big block of glossy white pain.

And then I’m going to beat you with it so hard, your grandchildren will have bruises.