This is Elizabeth McClure.

She is approximately as little fun to be around as a person can be.  Now I haven’t met Elizabeth, so I’m just guessing, but here’s why.  In June, Elizabeth was eating her usual Cadbury’s Nibbles, a delightful chocolatey treat, when she came across something that stopped her dead in her chocolate-eating, sense-of-humor-not-having tracks.  Here’s a photo. 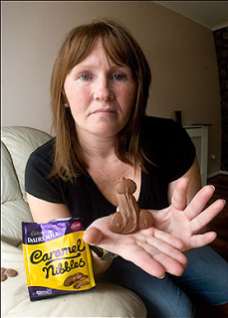 Yes, ladies and gentlemen, that’s a penis.  The most delicious penis ever—again, I’m guessing—but a penis nonetheless.  Let’s hear the riveting story behind this.

Elizabeth McClure, 38, was tucking into a packet of Cadbury’s Nibbles when she picked out the saucy sweet.  But furious Elizabeth failed to see the funny side – and has now demanded an apology from the confectionary giant.  She is convinced that the three-inch treat was deliberately fashioned by workers.

She…really?  She thinks it was intentional?  Why the hell would she think that?

“It is vile – the level of detail is disgusting and I felt sick.”

The level of detail is what makes you so sure?  Because I’ve seen a fair number of penises in various forms of online entertainment in my day, and I’ve seen my own…probably dozens of times…and I’ve never seen one with, for instance, a beak.

I’ve also never seen balls with nipples, veins that run on to the head, and so on.  Oh and it’s flat.  Much like if several pieces of candy had melted together on a conveyor belt somewhere.  Maybe this shouldn’t surprise me, given her obviously sparkling and carefree personality, but I get the feeling that Elizabeth here doesn’t see a lot of penises.  She apparently feels sick when she sees them, after all.  Unless it’s because it’s brown?  Maybe she’s racist.  What’s the big deal anyway?

“I can take a joke but any child could have found this.  My two-and-a-half-year-old grandson eats these and I’d have been horrified if he’d found it.”

Ok first of all, you clearly can’t take a joke, since you’re demanding an apology from the world’s second-largest confectionary company over what is very clearly an accident.  And second, you know who wouldn’t have been horrified to find that in your candy?  YOUR GRANDSON.  I just want to pause and point out that this 38-year-old woman has a two-and-a-half-year-old grandson.  Do the math.  But anyway, little kids, especially toddlers, don’t make that connection.  They don’t give a shit.  Hell, as one of the commenters pointed out, it could also look like a hammer or a rocket, so maybe she’s the pervert for jumping straight to the penis conclusion.  And would you like to hear what Cadbury said in response?

“It appears some of the Nibbles have melted.  We will of course offer a full refund if the consumer is unhappy.”