You’re getting older.  Gone are the gallivanting days of being single, the one night stands, the keg stands, the ability to take 15 shots in a night and still function the next day.  Gone is the six-pack that you could maintain on a diet of frozen pizza and Snickers bars, gone is your full head of hair.  Gone are the days when you recognized the name of any artist on the radio.

But that doesn’t mean life is over, right?  After all, you’ve got a secure job, you can afford expensive scotch, and you just bought that Touch of Gray stuff so you can look young but “experienced” like that doucheface in the commercials.  Those youthful days were reckless and fast-paced, but you’re better off now.  After all, you still have your dignity, right?
Wrong.
These three products are designed for people that may have missed school the day they taught dignity.  Then they saw “dignity” on the vocab test of the SAT and yelled “WHAT FRESH HELL IS THIS?” and stormed out.  And now they’re sad and pathetic and probably fat.

The slogan of the SlobStopper is “Bibs aren’t just for babies!”  That does not bode well, as I imagine you share with me the reaction, “umm, yes they are.”
The SlobStopper is, as you may have guessed, a bib for adults.  Why, you may be wondering, the fuck would I, a grown man in control of my own faculties, need a bib?  Allow the video to enlighten you.

The video starts off with the usual line because apparently those are the only words that people who invent insultingly ridiculous products are allowed to know.  As the all-caps call for sympathy echoes across the room, a man sitting in his car in a parking lot goes to take a sip of coffee.  But alas!  The lid is improperly secured, and rather than noticing when it slips at first, he powers through and dumps the entire fucking cup down his shirt.  And to add insult to inevitable, scalding injury, the rather nice-looking lady walking by, previously impressed by a man with the fortitude to eat lunch alone in his car, frowns and moves right along. 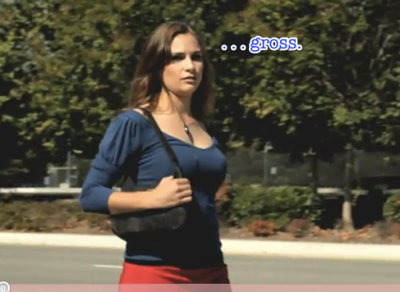 Now if you’re a normal person and know not to try to drink liquids immediately after major oral surgery or a debilitating brain hemorrhage, then at this point you’re probably thinking, “You know what?  That’s actually never happened to me.  In fact, nothing like that has ever happened to me or anyone I’ve ever encountered.”  Nevertheless, we soldier on.
INTRODUCING THE SLOBSTOPPER, the commercial calmly explains.  JUST SLIP IT ON AND ENJOY YOUR BUSY LIFESTYLE.  PERFECT FOR YOUR COMMUTE AND EVERYDAY USE.  Well thank goodness for that.  For those of you too busy to retain basic motor control, there is a solution.  Now comes the moment of truth.  Take two.  Can he get it right this time?  A beslobstoppered man raises his coffee to his mouth again, and…
Again he barfs it into his lap.  I’m beginning to think that this man needs medical attention, or perhaps that he’s an alien in human skin and hasn’t quite worked out how to use it yet.  Either way, he’ll have his pick of the ladies because look!  The same exact woman with slightly different hair is walking by, and she seems impressed.

The commercial then goes on to explain the materials (plastic) and technology (there isn’t any) behind the SlobStopper, before ending on one final scene.  A mom is in her car and two young girls in soccer uniforms, presumably fresh out of soccer practice, pile in.  As the video blares, YOU WON’T HAVE TO WORRY ABOUT STAINS . . . ANYMORE, Mom reaches for her SlobStopper and makes this face.

That alien hypothesis is starting to look a little less crazy.

Ok, so you’ve effectively stopped the slob.  Now, when you spill every single thing that comes at your mouth down the front of your chest, it’s just funneled on to the floor of your car or into your lap instead, because as long as that shirt stays white, appearing to have coffee-scented pee all over you is totally cool.
But sometimes the grind still gets to you.  Maybe the girl you managed to reel in with your display of let’s call it “hygiene” stopped being impressed when she realized that there are dozens—nay, hundreds—of men who simply keep their whole beverage in their mouth in the first place, and she left you.  Maybe the alien mothership hasn’t called in a while.  Whatever it is, you’re feeling down.
Enter LeWhif.

I know the purpose of this product may not be immediately apparent from the name or picture, but LeSmellWithLeMouth or LeMoleculesOfLeFlavor doesn’t sound quite as elegant.  LeWhif is inhale-able chocolate (or coffee).  Apparently it’s for “chocoholics on a diet,” which I’m pretty sure means “fat sad people,” but hey, whatever works.  We all know from TV that chocolate cheers up stressed women to essentially the verge of orgasm with every bite, so why not get that same pick-me-up without the calories?
Here’s why.

That right there is from a website called NutriStrategy, and I don’t have a clue how reliable they are, but they say that a 155-pound person will burn 176 calories playing an hour of croquet, which I’m pretty sure is the least strenuous activity that one can legally undertake outdoors.  The reason I bring this up is that one square of Hershey’s chocolate contains 17.5 calories.  So for less money, the chubbily depressed could eat a little bit of normal chocolate that you get to chew and swallow and everything, and then play six minutes of croquet and burn it all back off.  But I’m sure LeWhif is just as satisfying.  After all, you know that feeling when you smell something delicious wafting through the air and suddenly you’re as satisfied as if you just ate a whole plate of it?  It’ll be just like that.

You don’t understand.  You did everything right.  You kept your shirt clean, you were responsible with your kind-of-chocolate intake, and yet the pounds still won’t come off.  Maybe you skipped your daily six minutes of croquet, but that’s not your fault, who has that kind of time?  Calm down and take a deep breath (with micro-chocolate in it if you must).  Hammacher Schlemmer is here. 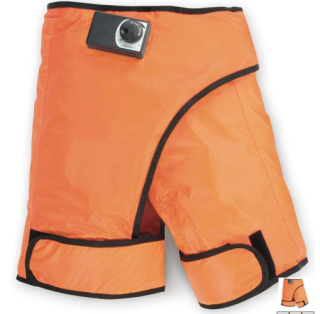 Those are called Sweat Pants.  That sounds like a fairly innocuous name—after all, I own sweatpants—until you remember that Hammacher Schlemmer has not yet been made aware that products can be named after things other than their literal purpose.  I can feel the “wait a second…” coming from your end of the Internet, so I’ll cut to the chase.  They’re pants.  That you sweat in.  In a horribly real sense.  I’ll let them explain.

These are the heated pants that produce the soothing benefits of a sauna.

I very much doubt that.  Anyone who gets relaxation in a sauna not because it’s dark and you’re bathed in steam and not wearing clothes but from the part where your genitals are being roasted is not someone you want to sit next to wearing just a towel.

The pants are lined with a silicone heating element that adjusts from 95º F to 167º F to induce perspiration and increase blood flow to help reduce inflammation of joints and help soothe tense, sore muscles.

And murder the shit out of every last little sperm that you ever had.  It’s been repeatedly demonstrated that higher ball temperatures lead to reduced testosterone and sperm production.  And you may be willing to wear an apron in the car and suck chocolate mist out of a small pink tube, but you’ll be damned if you’re going to sacrifice your manliness.

A tethered controller allows you to select the temperature and the integrated timer automatically turns off the pants after 50 minutes. The pants are made from soft polyacrylic with fibercotton fill. The pants can be worn over athletic shorts and they have a hook-and-loop waist strap and leg straps that adjust to provide a proper fit. One size fits all.

There is only one part of that last paragraph that concerns me.  The pants can be worn over athletic shorts?  Why?  So you can go for a run with a bright orange electric blanket wrapped around your crotch, streaming sweat out the bottom of each leg?  So you can pretend you’re athletic?
Look, I can mince words all day long, but let’s cut the shit.  This is a product designed to allow you—assuming it works exactly as it’s intended to—to sit in a waterproof orange bag as it gradually fills with your own asscrack sweat.  That’s fucking disgusting.
And so concludes our list.  For those who skipped being a toddler and haven’t fully grasped liquid consumption, we have the SlobStopper (still fun to say).  For the desperately sad and festively plump population, we have the chocolinhaler.  And for…I don’t even know who, serial killers maybe, we have the Sweat Pants.  So here’s what I want you to do.  If you ever see anyone using any of these products, even if someone just mentions that they own one of them, go up to them.  Put a hand on each shoulder and look them in the eye.  Resist the urge to laugh at them.  Look into their eyes, undoubtedly brimming with stifled pain, and tell them, “it’s not your fault.”  Then walk away.
It’s not much.  But maybe it’ll help.