This seems to be the tone of most of the articles covering a recent discovery by Richard Hoover of what appear to be bacterial fossils in the Orgueil meteorite.

And as usual, it’s up to real scientists to make a desperate attempt to restrain the slavering news media and public and explain to them that maybe they should SLOW THEIR ROLL JUST ONE GODDAMN SECOND.

As Jonathan Swift once said,

Falsehood flies, and truth comes limping after it, so that when men come to be undeceived, it is too late; the jest is over, and the tale hath had its effect.

What that means is that by the time anyone hears the real truth about what happened here, it’ll be too late and they’ll already have started chain emails about it in Comic Sans because everyone is stupid.  Or they’ll never hear about it because “Scientist doesn’t find alien life after all!” is unlikely to make the news.

Now to be clear, I’m not saying that Hoover is lying, or even that he’s wrong.  I am saying that the paper came out mere days ago and we just don’t know yet.  Here’s all the problems with this story, laid out in a numbered list because that’s the only way you’ll read it. 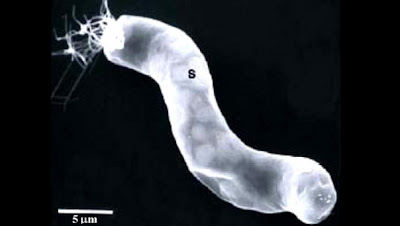 That picture appears on Yahoo! News and Gizmodo as the only one associated with the article, and no explanation is given for what it is or where it came from.  It’s only natural to assume, then that if we’re reading about bacteria being found on a meteorite and we only get one picture, that that must be it.  And by golly, it sure looks like bacteria!  Case closed, I’d say.

The reason that looks like bacteria is that it is bacteria.  Or one bacterium, specifically.  From Earth.  It’s just a picture of a Titanospirillum velox bacteria, in the same sense that you can find a picture of “a cat” on Google Images.

The real picture that should be shown is this one. 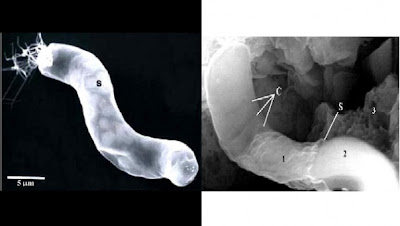 That shows the actual bacterium on the left and one example of the fossilized shapes that were discovered in the meteorite on the right.  And guess who the only news outlet to properly use and caption that photo was?  FoxNews.com.  Come on now, people.

The picture then leads to an interesting question: Why does Hoover think that this is proof of life?  The basic answer to that question is that it looks like bacteria.  It’s roughly the same size and shape as some bacterial shapes we’ve seen on Earth.  Fair enough, that’s certainly intriguing.  But then there are other shapes that don’t look like terrestrial bacteria.  Hoover says that they’re alien, that they don’t exist on Earth.  Couldn’t those shapes also indicate that rock makes some weird shapes sometimes, and some of them happen to look like bacteria?  Hard to say.  Rocco Mancinelli, a microbiologist in San Francisco, says he sees “no convincing evidence that these particles are of biological origin.”  The other issue is that they’re the same size and shape as T. velox, which is, as bacteria go, enormous.  You can see based on the little scale there that T. velox is about 5 micrometers across and maybe 40 long, which makes it roughly eight thousand times the volume of a typical E. coli specimen.  It’s hard to say it looks like bacteria when it’s way bigger than almost any bacteria we’ve ever seen before.

It also needs to be asked whether, if they are in fact bacteria, we’re sure that they didn’t come from Earth.  Hoover assures us that these fossils were seen on fresh breaks in the fragment in previously unexposed rock, and that they’re embedded in the structure of the rock, but it’s a far simpler explanation to say that the rock fell (in 1864) and, in the 147 years in between, got some crap in it.  Researchers will have to be extremely careful to make sure that these aren’t earth bugs.

The fact is, Richard Hoover doesn’t have a great track record in this field.  In 2007, he claimed to have found life in the Murchison meteorite, a claim that fell apart with further critique.  In 1997, he did the same thing, and fell short there too.

Another strike against him is that we’re hearing from new sources that the paper is being submitted to other scientists for review.  That’s not how that should work.  It’s admirable that he’s submitting to peer review, but that should always be done well before any attempt at a conclusion is made.  Extraordinary claims require extraordinary evidence, and this is a pretty damn extraordinary claim.  To say anything to the news media before the appropriate peer review has been done is a mistake, and one that has been made famously before, especially in the case of cold fusion in the 80’s.

But wait, hasn’t it already been peer-reviewed and published?  The answer to that is, to some extent, yes.  It’s going to be in the April issue of the online Journal of Cosmology.  That should lend it some credibility, if the editors have vetted it, right?  Well, just because someone’s on Oprah doesn’t mean they’re an expert, and just because your paper’s in the JOC doesn’t make it science.  They’ve already published some very shaky papers, like one that attempts to discredit the Big Bang Theory by saying (among other things):

Why the Universe should have had a beginning, or why it would have been created, cannot be explained by classical or quantum physics.

That’s all well and good, but Stephen Hawking put forward a quantum-physics-based theory for the origin of the Universe decades ago, based on theories developed by Einstein almost a century ago.  It’s actually in Hawking’s book.

The paper’s right here, but unless you’re ready for 5,800 words of blatant factual untruth, don’t click that.  All you really need to read is the abstract.  It may not make sense if you don’t understand a fair bit of astronomy, but I counted 26 indisputable errors in the abstract alone.  It’s also worth noting that Rhawn Joseph, the guy who wrote that paper, is not an astronomer.  He’s not a physicist, or a cosmologist.  His degree is in neurobiology and he is, based on a detailed assessment of his personal web page, a raging dickhole.

But Rhawn isn’t the only stain on the JOC’s reputation.

Chandra Wickramasinghe, one of the JOC’s editors, thinks life on Earth was started by a meteorite containing life from somewhere else, which is fine, but he sees it everywhere.  He thinks that red rain in India was caused by alien bacteria (it was dust).  He thinks that SARS was alien in origin.  He thinks that the flu—the normal influenza that goes around and ruins Christmas break every year—came from space.  He has accused NASA of covering up life on Mars because they found liquid water (except they didn’t) and because there are organic molecules in Mars rocks (except there aren’t).  I know you’re not supposed to take apart an argument based on the person making it, but Chandra is a crazy person with an alien-boner so throbbing that he’d publish a paper about extraterrestrial life if it was written in crayon.

Furthermore, despite their heavily-touted stats about how much attention they get online, the JOC is going out of business.  They’ve been online about eighteen months, and now they’re leaving.  They’ve released a press release stating their regret that they were unable to remain viable, and calmly explaining the reasons for their closure.

No wait.  The opposite of that.

Right here is a link to the most passive-agressive, paranoid, crazy-person rambling since Muammar Gaddafi’s UN speech last year.  It’s entitled “Journal of Cosmology To Stop Publishing—Killed by Thieves and Crooks” and goes on to blame EVERYONE IN THE WORLD for attacking the JOC because it was a threat to the dogmatic scientific community.  This is an actual quote from the press release:

Because JOC’s editorial policy was to publish all peer reviewed science-based theory, including articles which directly challenged the “sacred cows” of “conventional wisdom”, its success posed a direct threat to the entire scientific establishment and the “gate-keepers” who wish to protect easily disproved myths and crush dissenting views. Suddenly, here was this upstart, highly successful scientific journal, with a prestigious editorial board, which was directly challenging the status quo and their control over science.

They also claim that NASA is in collusion to shut them down because the JOC is in danger of exposing NASA’s incompetence, which they would do because they’re incredibly popular and everyone pays attention to them.  Here’s another quote from the press release:

The Journal of Cosmology (JOC) was founded in the summer of 2009, published its first edition in October, and immediately became a success. Within one year it was receiving nearly 1 million hits a month and dozens of news articles were appearing regularly about its content–a phenomenal achievement for a scientific journal.

You’re right, that is a phenomenal achievement.  Too bad it’s a blatant lie.  I did a quick Google News search for “journal of cosmology,” and narrowed it to between 10/01/2009 and 10/01/2010, fully expecting to be flooded with dozens of search results.  Here’s what I found.

Ok, so technically that is dozens.  Two of them… They also say they peaked at a million views per month, and are now getting 500,000.  Quantcast, a website that keeps track of these things, disagrees. 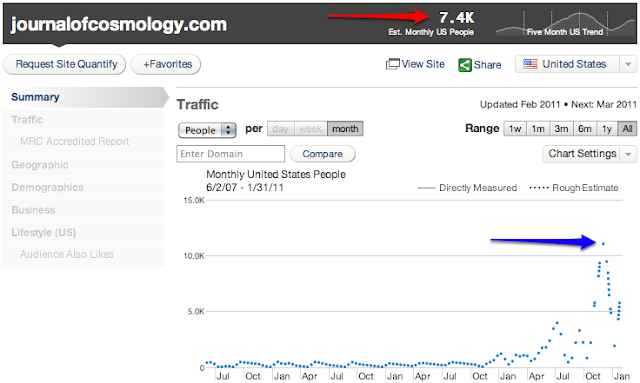 The red arrow in that picture is pointing to their average monthly traffic and the blue one is pointing to their all-time peak, which was around 11,000 hits per month, it appears.  I would like to point out that not only is eleven thousand less than a million, and not only is seven thousand less than five hundred thousand, but that this blog got over 8,000 hits in January.  So suck it.

So what are we left with?

Again, I’m not saying that the study is wrong.

But it’s not looking good.