Look, I’m sorry I use Inhabitat so much.  But they’re idiots.  It’s a great source of material.  That said, here’s their list of “Top 5 Green Gadgets For Guys.” 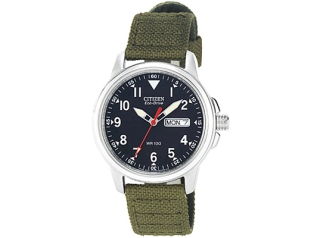 Technically this is hundreds of watches, because all of Citizen’s watches are solar powered, or “fueled by light” in the douchey language of the website.

Inhabitat says you should get one because “blinged-out chunky wrist-rocks are sure to weigh heavily upon your wallet and the environment.”  That’s true, but that’s exactly what Citizen makes.  Their watches are huge, shiny, and massively expensive.  The one in the picture is apparently the sole exception (I looked through hundreds), and it’s still over a hundred dollars.  Here’s a more typical example: 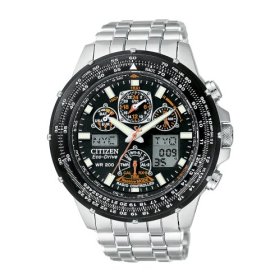 Gadget Factor: pretty good.  Watches aren’t the first thing I think of when I think of gadgets, but these ones are all ridiculously techy so I guess they count.

Green Factor: basically nil.  They’re not made out of recycled or sustainable materials or anything, so I guess it’s the whole solar-powered thing, which is preventing approximately one tiny watch battery from going in the landfill.  A tiny, insignificant amount of green cred here.

Also, it annoys me that they use the phrase “Unstoppable, just like the people who wear them” in their ads and on the website.  Their example is Eli “Everyone-Likes-My-Big-Brother-Better” Manning.  Eli Manning is stoppable.  He gets stopped all the time.  In fact, here’s a video of Eli Manning getting the shit stomped out of him.  It’s a bad line, stop using it. 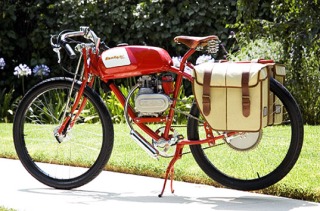 Here’s how Inhabitat introduces that bike you see there:

Few modes of transportation capture the trappings of classic cool more than the motorbike – look no further than Brando and Dean to catch our drift.

And few modes of transportation ruin the trappings of classic cool more than a tiny red almost-moped.  You know what Brando and Dean had in common?  Real fucking motorcycles, not that limp-wristed piece of shit in the picture.  Oh, but it’s so cool!  It can be pedaled like a normal bike or you can turn on a tiny, undoubtedly two-stroke engine and putter along like an idiot!  Hooray!

Gadget Factor: awful.  Men like motorcycles, it’s true, but because they’re fast and cool and an excuse for women to cling to you from behind.  This one is none of those things.  It has a fucking leather bike seat, for god’s sake.

Green Factor: also awful.  You can either look at this as a motorcycle that can’t carry any more stuff or people than a bike, has tiny sketchy tires, and goes too slow to be useful, or you can look at it as a bicycle that’s been rendered unnecessarily heavy by a goddamn gas-burning engine.  You know what’s really eco-friendly?  Bicycles without gas-burning engines. 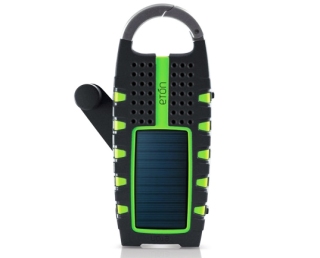 It’s a hand-powered radio.  It also has a USB charger, powered by the same crank.

Gadget Factor: meh.  If the guy you’re buying it for thinks that having an FM radio in the backcountry where there isn’t actually FM coverage is cool, and also has the patience and arm strength to crank the fucking thing all night, then it’s great.  If the guy in question is a normal person, it’s stupid.

Green Factor: begrudgingly decent.  It doesn’t use batteries, and it charges other stuff that would otherwise be in a wall.  It’s not efficient or useful, but it is green. 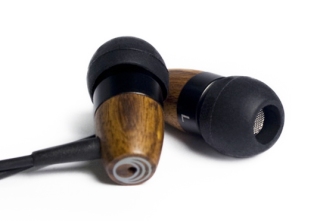 Here’s the deal with these headphones.

Sustainably-sourced woods and PVC-free cables put the good in the goods, which are packaged in recycled materials to boot.

Gadget Factor: not great.  You’d expect a product this self-righteous to be at least pretty good at what it does, but here’s a review of the headphones:

The Thinksound Rain 9mm headphones offer clean, open sound, but their bass response isn’t up to snuff for many genres of music. These ‘buds are best-suited for lovers of classical, oldies, and folk music.

Green Factor: dubious.  I don’t know this for a fact, but I’m willing to bet that “sustainably sourced” means “we use so little actual wood that trees grow faster than we can turn them into headphones.”  Either way, you’re offsetting a tiny amount of plastic (for sixty fucking dollars).  Not a huge help. 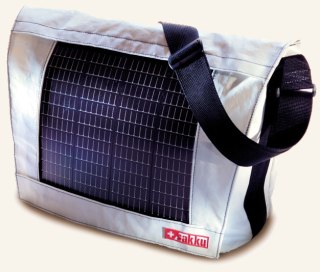 Green Factor: poopy.  That solar panel, according to Inhabitat, puts out a “powerful” five watts, which means it’ll only put out that much if it’s in perfect perpendicular sunlight, but I’ll work with that number.  The charger for my computer is 80 watts, and it takes about 3 hours to charge from completely dead.  That means that at 5 watts, if the computer was off, it would take 48 HOURS.  Meaning that on the ten-minute ride to Starbucks/Borders, in ideal sun conditions, it’ll charge about a third of a percent.  Meaning it’s fucking useless.  My phone charger is only 35 watts, so it might charge the phone a few percentage points, but still.  And if it’s not charging, then all you’re doing is manufacturing solar panels (not a clean process) and not using them, and that’s wasteful.

I suggest you shop elsewhere.