by DangerOnionPosted on September 29, 2010January 28, 2014
Two years later would come the worst motorsport disaster ever, when 86 people lost their lives and 120 more were injured.  Eleven years after that, a disgruntled Henry Ford II decided that he’d had enough of Ferrari’s victories and thrashed them four years running with the legendary GT40.  And 27 years after that, Ayrton Senna ran the undisputed greatest single lap of all time, moving from fifth to first in a single lap at the European Grand Prix, in the rain and against some of the best racing drivers the world has ever seen.  But none of that had happened yet.
The year was 1953.  The venue: the 21st running of the greatest series in motorsport, the 24 Hours of Le Mans.The car in question was a beautiful, slippery beast of a machine, the Jaguar C-Type.  It used thinner aluminum body panels to reduce weight, a rubber gas tank for weight and speed of fill-up, and a 3.4 liter twin-cam straight six producing 180 horsepower.  It weighed 2100 pounds without the driver—a mere feather of a car.  But its secret weapon was hidden from view: disc brakes on all four wheels.  Combined with its wispy lightness, they allowed the car to brake later into corners, recover faster from overheating, and push the envelope on the fabled Mulsanne straight.

The man behind the wheel of the British-racing-green aluminum cigar was Duncan Hamilton, a 33-year-old amateur from Ireland who had partnered up with his friend Tony Rolt to take on the giants of the car world at Le Mans.  They qualified well, and were ready to give it their stalwart British damnedest.

Before the race, though, Hamilton and Rolt were disqualified for a technicality—having the same number as another car on the field.  They decided that the best cure for dashed dreams was alcohol, so they went into town and got absolutely, blindingly shit-faced. 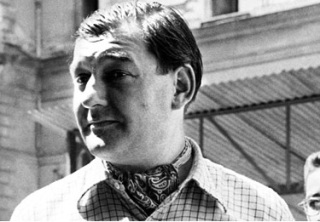 Unfortunately, the race organizers then changed their minds.  They decided that the pair could run, so a member of the pit crew dragged Hamilton back to the track, threw a helmet on him, and set him on the start line.

This, you may think, was a recipe for disaster.  The world’s scariest car at the start line of the world’s most brutal endurance race, driven by the world’s drunkest driver.  Surely, this could only end in disaster.

You’d be wrong.  He won.  And he didn’t just win (though “just” seems unfair), he destroyed everyone else on the track.  Every time he came into the pits, he was given a cup of coffee to sober him up, but he eventually protested that the caffeine was causing his hands to shake, so they switched him back to brandy to calm him down, and still he was the first driver to finish Le Mans with an average speed of more than 100 mph.  He was the first man to run over 300 laps in 24 hours, and he was the first man to run over 4000 kilometers, a distance that would have been enough to win the race in 1995.

To be honest, it might be a good thing that he was wasted (note: Unreasonably Dangerous Onion Rings does not endorse driving drunk) because towards the end of the race, he hit another hiccup.  Look back at the photo of the car.  You’ll notice that it has a negligible amount of windshield, meaning that if a pebble or a bug or something got flung up, you’d just intercept it with your face and maybe die.  Well, Hamilton hit a bird.  At 130 miles an hour.  With his face.  He didn’t crash, he didn’t swerve, he didn’t scream, he didn’t die.

And that’s the best race ever.