It’s over. The oath has been taken, the barrier fences will soon be broken down and put in storage, and the police will go back to their normal shifts. There are no more appeals, no more recounts, no more renegade electors who might swoop in at the 11th hour and change this whole thing. As of this morning, Donald John Trump is the President of the United States of America, and there is not one goddamn thing you can do about it.

Many of you are upset. Many of you were upset when he was elected, despite losing the popular vote, something that has happened many times before. Many of you were upset because you felt that the electoral college was an antiquated system that had cheated the better candidate out of a rightful win. In fact, many of you were upset since Bernie Sanders lost the nomination for the Democratic nominee, and you have voiced your feelings on Facebook and Twitter and in marches and protests and petitions and any other way you can show as many people as possible how upset you are.

It didn’t help. Bernie lost. Hillary lost. Donald Trump won. And you are still upset. And do you know why? Because no one cares that you’re upset, except the other people who are upset. Hillary supporters who thought she deserved the nomination did not care how you felt about Bernie’s loss, and Trump supporters whose candidate is now in office would not possibly care less about how you feel now.

And here’s the kicker: They are right not to care.

You see, no one has the right not to be upset. No one has the right not to be offended. Just as you have the right to call Donald Trump a racist and a dictator and a rapist and a knockoff handbag left on the highway for several days and then brought to life, Trump’s supporters have every right to call Hillary a bitch and a cunt and a liar and a criminal, and they have every right to call you a pussy and a crybaby and a spineless liberal worm who wouldn’t know patriotic duty if it slapped you in the face. You cannot stop them from saying those things, and it would be ridiculous to try.

The reason no one cares how you feel is that everyone else feels just as strongly as you do. The Christians who oppose gay marriage aren’t doing so to bother you, or because they’re hateful people. They’re doing so because they feel, just as powerfully as you feel gay people should be allowed to get married, that gay marriage is a sin and it’s their religious duty to prevent it happening. This is not a contest of who feels most strongly that they’re right, because that contest will inevitably end in a tie.

But remember how earlier, I said “it’s over”? It’s not over. It’s just beginning. It’s possible that Donald Trump will be impeached for one reason or another, or that he’ll have a rage stroke when someone tweets that his toilets aren’t even coated in real gold, but don’t count on that. What you have to assume now, and what you should have been assuming since November 8th instead of posting articles about how the rogue electors could still turn this around, is that Donald Trump will be the President of the United States until January 20, 2021, at the very earliest. And if the left doesn’t get its shit together, it’ll be longer than that.

So there are three things you can do. Things you can actually DO, that will make a real difference. The first is to fight injustice and untruth in your own life, where and when you might see it. Most of you won’t see it very often, and some of you will over-diagnose it and over-react to it, and some of you will see it and ignore it because it’s easier not to confront people who are just going to yell at you. I get that, but you have to try.

That means confronting it from both sides though. In the last few years, the left has been at least as guilty as the right of making shit up to support their own narratives. For example:

Rumors have spread in the last few hours that Donald Trump removed all mentions of LGBT, climate change, healthcare, and civil rights from the White House’s official website. This is not true. What is true is that the Obama White House’s content has been archived, as is standard practice, to make way for the policy pages and press releases of the new president, who has only been President for about eight hours now. The website is pretty empty, and for good reason.

A photo (which I’ve elected not to include) of Trump at a KKK cross-burning circulated on social media. It’s a real photo, but of an impersonator, hired by a photographer named Alison Jackson for a book in which she employs actors to depict celebrities in compromising situations.

Just this week, this meme floated around the internet, decrying the inevitable results of capitalism and the super rich. No doubt most of those who shared it consider themselves intelligent, progressive people, immune to the propaganda and lies for which they blame the right. 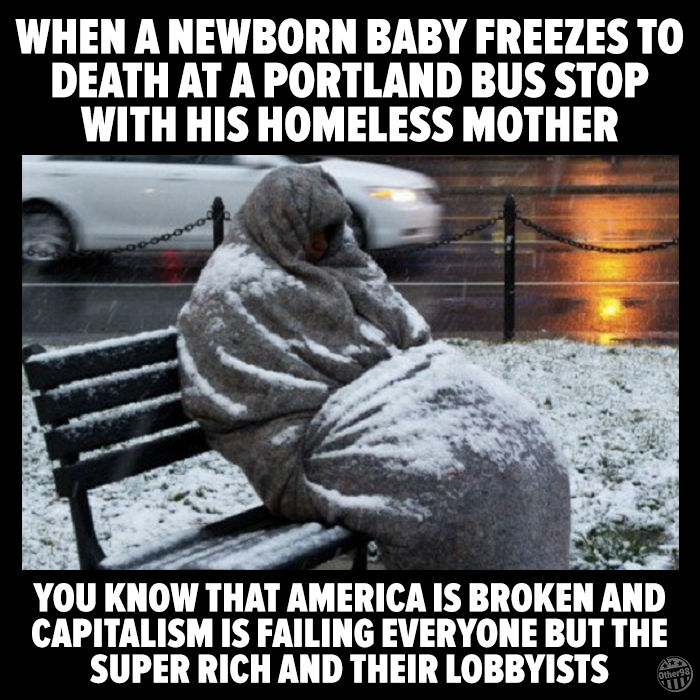 The photo is, unfortunately, intensely misleading.

And mere days ago, a photo circulated about how vanilla ice cream was originally black, until white people changed it because “White people couldn’t tolerate eating something that tasted soooooo delicious being black.”

It played right into the hands of people who see systematic oppression everywhere they look. It’s not true.

The list could go on forever if I wanted it to, and I could go in both directions. The reason I haven’t is to prove a point: no one is immune to this. The left like to think that “fake news” is something that Alex Jones and Fox News (or “Faux News” if you like abysmal puns) and Breitbart propagate in order to deny that liberals are always right about things. That’s true sometimes. Sometimes it’s spin, sometimes it’s conjecture, sometimes it’s outright lies. But it happens on both sides of EVERY SINGLE ISSUE and it is your job to stop it, whether people are comparing Trump to Hitler or comparing Hillary to Hitler (seriously, enough with the Hitler shit).

The second thing you can do is more concrete, and somehow more difficult, and that’s to admit that you probably cannot make any tangible difference yourself and give money to the people who can. Marching down the street with a sign that says “Girls Just Wanna Have FUNdamental Rights” might make you feel good, and might get you a pat on the back from your Instagram followers, but will it sway a lawmaker’s vote? Will it get an abortion or an IUD or a pap smear for a poor woman who needs it? Will it put condoms in public school health offices? It categorically will not. Do you know what will? Money.

Give money to the people with both the means and the opportunity to affect real change. The NRDC. The Climate Reality Project. The Sierra Club. Planned Parenthood. RAINN. The National Organization for Women. The New York Times. The Washington Post. Slate. The Atlantic.

What this means, in part, is admitting your own impotence, and that’s a hard thing to do. But YOU cannot save the planet. YOU cannot lobby for regulations against pollution. YOU cannot provide birth control for lower-income women. And YOU cannot hold politicians’ feet to the fire, or peer behind the curtain to uncover evidence of their misdeeds. These people can, and you can help them.

The final thing you can do is to vote. I know how many of you are disillusioned with the very concept of voting. Some of you made a very conscious decision not to vote for a presidential candidate at all, and now you’re upset that the “wrong” person won. But you have no leg to stand on. If you wanted the “right” person to win, you should have said so. There are over 300 million of us in this enormous, infinitely multifaceted country, and we have established a system, flawed though it may be, to figure out what those people want. Lawmakers are not reading your Facebook posts. The electoral college doesn’t care if you think it’s clever to write “Really, America? This is the best we can do?” on your Twitter feed. They only know what you vote for.

So vote for the next President. Vote for your congresspeople in two years. Vote for your state senate, your governor, your city hall members, your sheriff. Look up their policies. Figure out who you like better of the two (or more) choices and vote for that person. DO NOT ABSTAIN FROM VOTING just because neither one is perfect. Your refusal to participate will not prevent someone from winning each and every election. Help the better one win, and hope that opens the door for someone even better next time.

And stop talking about how sad you are.

Leave a Reply to Terri A. Abbett Cancel reply