Back in November, Congress declared that pizza was a vegetable in a funding bill that addressed subsidization of school lunches.  A rider to the bill stipulated that ice cream counts as a calcium supplement and that a jar of bacon fat is now defined as a protein shake.

At least I think that’s what happened.  After all, look at all these headlines!  Here’s the Huffington Post (known for reasoned and not at all ridiculous articles like what rape is and why Hindu goddesses aren’t angry enough about it and also this CRAZY one that implies that Deepak Chopra is a human being worthy of respect):

And here’s the Gothamist, which uses a delightful piece of artwork to make its point:

And then there’s MSNBC, Fox, Reuters, and The Guardian. 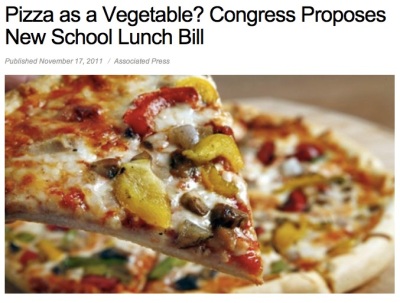 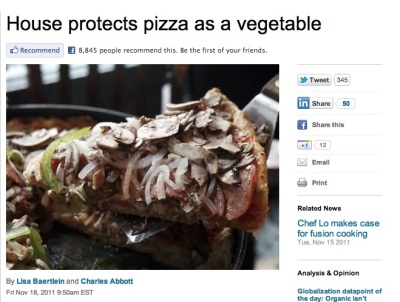 The news spread rapidly and, as will happen to literally every topic that has ever existed, became a meme. 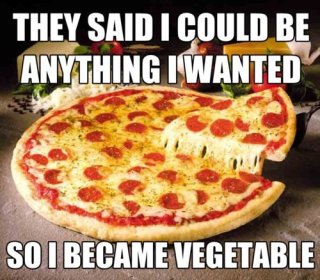 The resounding popular opinion across the web and world seemed to be that Congress had classified pizza as a vegetable because they’re stupid and don’t care about childhood obesity, and that this entitles lunch ladies to serve more pizza because they have to serve a certain number of vegetables, and now pizza counts as one.

It was just another one of those issues that indignant citizens like to yell about on Facebook, using phrases like “your tax dollars at work” and “this is what our country has come to” and “Obama is a fascist,” before going off to rub their erections together and speculate on whether Jesus would win a fight with Glenn Beck.

And as usual, they’re wrong and I’m right.

Here’s what happened: On November 14th, 2011, Congress passed House Bill 2112, the conveniently-titled “AGRICULTURE,  RURAL  DEVELOPMENT,  FOOD  AND  DRUG ADMINISTRATION,  AND  RELATED  AGENCIES  PROGRAMS FOR  THE  FISCAL  YEAR  ENDING  SEPTEMBER  30,  2012, AND  FOR  OTHER  PURPOSES.”  The bill is right here, but it’s 401 pages long so I don’t expect you to read it.  I certainly didn’t.  It has a staggering number of things in it that have nothing at all to do with this issue, so we’ll focus on the relevant part.

Like the fact that it doesn’t say “pizza” in it.

It only says “vegetable” twice, in Section 746, and all it says is that the funds allocated by that bill can’t be used to make rules that a) limit the number of servings of vegetables served at school lunches or b) are inconsistent with the current dietary guidelines for vegetables.

The issue was that currently, tomato paste is counted as more tomato than it actually is.  A serving of vegetable is considered to be half a cup, but an eighth of a cup of tomato paste is counted as a serving; sort of an extra-credit system, as it were.  There was a proposal to take that extra credit away, and that was blocked.  Ergo, pizza = salad.

But rules on school lunches are not based on vegetable content in the first place.  They’re based on calorie content (no more than a third of the recommended daily value) and fat content (the meal can’t be more than 30% fat).  So whether this passes or not, it doesn’t make a difference to how much pizza can be served.

But the more fundamental issue is whether an eighth of a cup of tomato paste should count as being just as vegetabley as a half-cup of other fruits or vegetables.  Let’s see how they stack up to apples, for example. 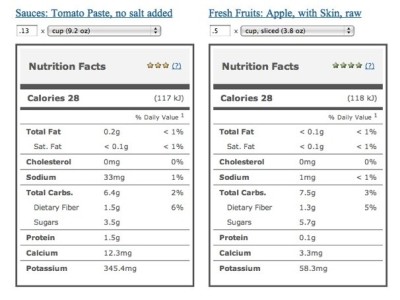 About the same, really.  Tomato paste has more sodium, but also more calcium, potassium, and dietary fiber.  Compare to a cucumber or iceberg lettuce, which no one would argue aren’t vegetables, and you’ll see that cucumbers are basically just water balloons with seeds for all the nutritional good they’re doing you.

Worse than that, according to a 2007 audit by the USDA, only 20 percent of schools meet federal requirements for fat content anyway.

So this changes nothing.

To be honest, I’m torn as to how to feel about this.  On the one hand, I do think the government has the right to regulate unsafe products like asbestos, lead paint, leaded gasoline, DDT, trans fats, etc.  I don’t think it’s overreaching for them to limit how much of certain things can be served to kids.

On the other hand, I have no sympathy for fat people.

I’m not fat, and do you know how hard I have to work to stay not fat?  Really goddamn hard.  I spend about 10-12 hours a week in the gym, and that’s why I’m not fat.  Do you know how hard fat people work to lose weight?  Not hard enough.  It’s that simple.  Oh, so you don’t have time to work out?  Eat less.  Eat better.  Maybe if you went for the occasional jog and didn’t subsist on chicken nuggets, you wouldn’t be fat.  Oh, you don’t like working out?  Tough shit.  In virtually every case, being fat is a failure of willpower.

That’s why I’m so sick of people blaming the obesity epidemic on increasing portion sizes or preservatives or McDonald’s.  If a Double Quarter-Pounder with Cheese and large fries and a large Coke is too much food for you (1550 calories), don’t fucking eat it.  And don’t give me that bullshit about how poor people can only afford shitty food.  Pasta is cheap.  Chicken is cheap.  Beans and rice are cheaper than dirt (and roughly as interesting to make a meal out of).  No one is making you eat crappy food or too much food.

And no one is making your kids eat pizza.

And no one is saying that pizza is a vegetable, unless they’re not paying attention.