It’s a safe assumption that everyone reading this has a cell phone.  But what if that cell phone IS TRYING TO KILL YOU?

Now, I should warn you right now that this post is going to use (goddamn) science.  I will explain it in terms that an Art History major could understand, so you should all be fine, but I’m just sayin’.  The basic fear goes like this:

I put that last one in because if you know even a tiny bit about physics or cell phones, you’d have to be cripplingly idiotic to think that cell phones are dangerous.

The problem, you see, is that even though items 1 and 2 are true, “radiation”—along with its more scientifically correct cousin “electromagnetic radiation”—is an extremely vague term.  It ranges from the most ferocious gamma rays that will literally blow you to pieces to the tamest of long AM radio rays, and I’m about to explain to you how these things work.

First, cancer.  Cancer happens when a cell mutates in such a way that it reproduces out of control and makes a tumor.  Reproduction of a cell is based on DNA, so in order to make a cell go cancerous, you have to fuck up that cell’s own personal copy of your DNA.  More specifically, you have to break a bunch of the chemical bonds that hold it together.  And not just a random group of them, it has to be a very specific (and hard to figure out) set of bonds.

Now, there are a bajillion ways you can do that chemically.  You can cook it with something acidic, dissolve it with something basic, or take the subtle approach.  Cigarettes cause lung cancer with chemicals, and that’s a hugely complicated process, so complicated in fact that we really don’t know how they do it, just that they do.  Lucky for you, there are only two ways to break chemical bonds physically.

The first one, and the one that everyone seems to be worrying about, is electromagnetic radiation (EMR).  Electromagnetic radiation takes the form of photons.  All the time.  Without exception.  Photons happen when an electron gets energy (like from heat or electricity) and then loses it.  The lost energy takes the form of a photon, which goes rocketing off at 670,616,629 miles an hour until it hits something.  Got it?

Now, these little bundles of light have a wide range of energies that they can contain.  Since light also acts as a wave, the amount of energy that a photon contains is expressed as its wavelength.  The shorter the wavelength, the more energy the photon has.  Visible light is between 380 and 760 nanometers, for perspective.

Here’s the interesting part.  You can only break a chemical bond if the individual photon that hits it has enough energy on its own.  If the photons don’t have enough energy, then it doesn’t matter how many photons you have, the bond won’t be broken.  Imagine, if you will, a brick wall.  If you throw a bowling ball at it, you’ll crack the bond between two bricks.  Throw lots of bowling balls and it’ll crumble.  But if you throw one ping pong ball or a billion, it’ll never come down.  It’s not a great analogy, but it’ll work.

So the weakest photons that can break one of the three kinds of chemical bonds in DNA (and this is undeniable physical and mathematical truth) have energy levels right around the strong UV to weak commercial x-ray level, and range from ten to a hundredth of a nanometer.  The really scary shit, the gamma rays, have a wavelength of around a femtometer, meaning they have energies a million times stronger than x-rays.  They’ll dissolve you.  For real.  Those are the bad ones.

The photons emitted by cell phones, on the other hand, have wavelengths that are between six and thirteen inches.  Chew on that for a second.

Now, I know you all hate math, so I did it for you.  The energy of a photon barely strong enough to break a chemical bond is about 1.52711 billion times as strong as the ones from your phone.  It’s not as though your phone can almost hurt you, it’s not even close.  The difference between danger and reality is  the difference between an empty soda can and the motherfucking Titanic.

There is one caveat, oddly the one that no one seems to talk about.  All EMR, when it’s absorbed rather than reflected, creates heat in the substance that absorbs it (you), so the heat from the cell phone radiation could cause cell damage that way.  I’m not going to run through the math again, but it turns out that the heat created by cell phone radiation is right around the legal limit for consumer electronics, and that’s about a tenth of the heat you get from standing in the sun.  Just the heat part, mind you, not the UV.  So that takes care of that.

Now, I know you have objections.  Here’s a few (let me know if you have more):
Q: Why do they even sell those little sticker things that you stick on your phone if there’s no chance you need them?
A: Because they (this company and others) are opportunistic bastards preying on the ignorant fears of the public to make some money.  That little thing “superimposes a low frequency ‘noise field’ on EMR that resembles the natural resonant frequencies of the body’s living cells. This effectively renders the EMR harmless,” which is bullshit.  The body’s living cells have no natural resonant frequencies.  Consider the difference in sound from flicking a crystal glass (resonance) and wood (thud).  For comparison, you can flick yourself in the eye if you’ve actually purchased one of these.

Also, this thing says it won’t “interfere or impede the efficacy of your electronic device,” which is lightly toasted bullshit with cheese.  If a cell phone works by emitting EMR, and you neutralize that EMR or whatever the fuck you want to call it, you’re affecting how it works.  And it costs $45.

Q: But what about this video?
A: It’s fake.  Entirely, incredibly, staggeringly, dangerously fake.  What they did was unscrew the horn from a microwave, mount it under that table, and turn it on when they turned the cell phones on.  I’m not going to explain how a microwave works because it’s fiendishly complicated and you need a fair bit of physics background to understand it, but suffice it to say that there’s a reason you can’t run it with the door open.  If they’d put their hands over the table, they’d have been boiled from the inside very very quickly.  If they’d kept it running, the temperature in the room would have gone up noticeably and rapidly.  Do not do this to see if it works.

Q: Then WHY is everyone so concerned about this?

A: Because everyone is stupid.  That’s why this guy sued his neighbor because he thought the neighbor’s WiFi, iPhone, and dimmer switches were triggering his “electromagnetic sensitivities,” causing him nausea, vertigo, aches, dizziness, arrhythmia and insomnia.  That’s why this person filed suit against a grocery store, alleging that the price scanner gave her daughter Tourette’s.  That’s why the 90’s were packed with panic over power lines causing leukemia (even less science behind that).

Moral of the story? 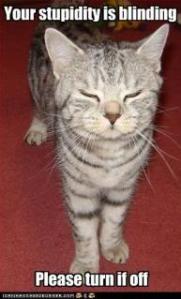